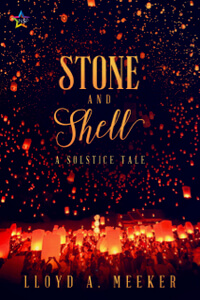 Author Lloyd A Meeker shares how finding out the worst news turned out to be great.

Prostate Cancer Saved My Life by Lloyd A Meeker

Last November I received my third cancer diagnosis. This time it was my prostate, and in January I had a biopsy which revealed I had two different kinds, one slow, the other very aggressive. There was no time to lose, so surgery was scheduled for February 7th.

I was deeply discouraged. My first two diagnoses had been over fifteen years earlier, and I had become certain cancer had long ago slipped from my rear-view mirror, although my takeaways from that experience had stayed with me: seize the moment, make time for the important stuff, focus on the people and work I love, make space for my own needs, be fierce and unapologetic about it.

Still, it was a shock to anticipate yet another round of treatment, and I was despondent about what having my prostate removed might mean in my intimate life with my husband. And for the first time in a long, long time, I began to wonder whether I had other cancer time bombs ticking away inside my body. It was stressful, having that strain between me and my wonderful old body. It had stuck with me through so much over my rather checkered 70 years.

As my surgery date approached, I went in for the standard array of pre-op screening. Everything came back fine, except the EKG showed a slight anomaly. We opted for a second opinion. The new EKG wasn’t any better. We did a CT scan, and it looked like there were some arterial blockage that caused concern. We agreed with the cardiologist to have a catheterization performed as precaution before the surgery.

So the next day I was lying on the table while the cardiologist started the catheterization, and I’m listening to him mumble medicalese to an assistant, when he asked someone to bring the cardiac surgeon on duty into the room. I remember thinking, “I don’t think that happens every time,” and then I don’t remember much of anything so I must have got another dose of good drugs.

I woke up en route to somewhere, lying on a gurney, looking at the ceiling. It’s a visual cliche from countless movies to have the camera focus on the fluorescent ceiling lights as they slide by in endless procession. It was vaguely humorous to see it again in real life.

Anyway, I was wheeled from the OR to intensive care, with about a million tubes stuck in me. The cardiologist and the surgeon came by later to tell me why I wasn’t going to be going home right away. My main heart artery, so subtly called “the widow-maker,” was 99% blocked, and the other three weren’t much better. Apparently although my heart itself was still perfectly healthy, the slightest heart incident would have killed me, and a heart incident would occur without warning eventually, likely sooner than later. So I was having quadruple bypass surgery in the morning.

I have to admit that was a major surprise, since I’d never had any heart concerns. Bob and I had a few tears of fear and despair, and gradually realized that as shocking as it was, this was extremely good news, as neither of us had any clue I was carrying a different kind of time bomb in my body.

So now I have a foot-long beauty mark running down the middle of my chest, along with the smaller, more recent trophies acquired during prostate removal. And I really do consider it a beauty mark. It’s a daily reminder of how lucky I have been, how lucky I am, and how much more life and love I can know because of it.

And that’s how aggressive prostate cancer saved my life. Sometimes, if we’re especially lucky, we get help from astonishingly unusual places.

Stone and Shell by Lloyd A Meeker

Eight-year-old Howie Evinger is convinced that his dad would be happier if he found a new husband. Howie would be happier, too. And somewhere out there in the city of Vancouver, there’s the right man for his dad to love. But how to find him? That’s a problem, especially if you’re just a kid and your dad says he doesn’t want another husband.

With the help of his quirky aunt Shanna, who calls herself a Buddhist Wiccan, Howie builds his very own solstice altar with cool symbols to support his search. It has a candle, a feather, and a twisty stick, plus an agate for his dad, and a scallop shell for his new husband. Share Howie’s solstice adventure as he learns how real magic requires courage and patience as well as symbols.

Where to buy Stone and Shell

Born on a farm in the Colorado foothills and having led what can only be described as a checkered life, Lloyd Meeker can honestly say he’s grateful for all of it. He’s been a minister, an office worker, a janitor, a drinker, and a software developer on his way to finishing his first novel in 2004. He is a three-time cancer survivor.
A number of his stories have been published, including Traveling Light (DSP Publications), Enigma (Wilde City Press), Blood and Dirt (Wilde City Press), Blood Royal, (Wild Rose Press) and Stone and Shell (NineStar Press). His novel The Companion (Dreamspinner Press) was a finalist in the 2015 Lambda Literary Awards.
Meeker and his husband have been together since 2002. Between them they have four children and five grandchildren. They live in south Florida, and work hard to keep up with the astonishing life they’ve created.
Twitter https://twitter.com/LloydAMeeker
Facebook https://www.facebook.com/lloyd.a.meeker
Amazon Author page https://www.amazon.com/Lloyd-A.-Meeker/e/B008FC5VF4