Posted on  09/13/2016 by Kayelle Allen
Today’s featured book is Take These Broken Wings by Livia Quinn. 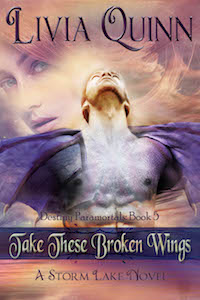 Title Take These Broken Wings
Genre Paranormal Cozy
Author Livia Quinn
Book heat level (based on movie ratings): PG13
Jack Lang knows first hand about Destiny’s secrets–turns out he was one of them. Five months ago he and his unlikely band of heroes defeated some nasty creatures intent on taking advantage of the Paramortals’ powerlessness during Chaos. After surviving the Chaos with the help of their resident dragon, Jack received the biggest shock of his life. And that was saying a lot.
He’d chosen Destiny for the normalcy and safety it could provide his teenager after a life of their own kind of chaos with Jordie’s mother. He’d been looking for Mayberry. Instead he’d found not a town, but a world full of magical beings, odd occurrences, and quite frankly, monsters. Think, Middle Earth. There’d been one shock after another and yet, instead of leaving and taking Jordie somewhere “safe”… he’d stayed.
Looking back, everything had started when he met Tempest Pomeroy. That was when his world turned upside down—along with half the town. He’d surprised himself with his acceptance of the supernatural. And he’d almost accepted this latest blow, but that was before he found out he no longer belonged anywhere. Not with humans, and not among supernaturals. Something had gone haywire in his family DNA.
Now the women in his life feel he’s abandoned them. Actually, he’s abandoned everything except for the need to quench this gnawing hunger in his gut and the compulsion to jump off the highest levee in Laccasine Parish.
Too bad there were no mountains in Louisiana.

Get a free book

All four Destiny books are on sale now and one commenter will receive a free copy of the Destiny book of your choice in epub or mobi.
Preorder Take These Broken Wings Now – Release day Oct 2nd!
Publisher Campbell Hill Publishing

Livia Quinn is a DC native who’s lived on the bayou in Louisiana for thirty years. After experiencing weather disasters in the South, it was only natural that they would play a part in her Storm Lake world, a place where supernaturals and mere-mortals co-exist (but on different ends of the lake. That’s one of the rules. Never let the mortals see you use your magic.)