Blame It On The Moon By Livia Quinn @liviaquinn #RLFblog #paranormal 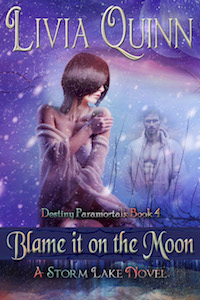 Love…when you least expect it.

D.C. native, Livia Quinn, lives and writes by the bayou in Louisiana. She’s written eleven books in her Storm Lake series, both paranormal and military romance. While working as a plant manager, computer trainer, mail lady, professional singer, and small business owner she stocked her brain full of great characters and fodder for her stories and is eager to share them with her readers.

Blame it on the Moon

It’s the height of the Para-moon and Sheriff Jack Lang is up to his ‘6’ in alligators. Defending those weaker than himself is in his DNA which is what drove him to become a Navy pilot. Now, who is he kidding? Alligators he could handle! But supernatural bad guys?

Ragtag doesn’t begin to describe his band of temporary ‘heroes’. If he has to go to war with the group that showed up at dawn, he might as well start cutting up white sheets and attaching them to garden stakes.

With Tempe and the other Paramortals ill or incapacitated and the sudden appearance of beings he’s never heard of, will Jack be able to keep Destiny out of the hands of their enemies for the rest of the power down and—very important—keep the humans in the dark? It’s only twenty-four hours. If worse comes to worse, he has a dragon on his side and a few surprises up his sleeve. “Yippe, ki, yi…”

But a lot can happen in twenty-four hours and things don’t always go as planned. 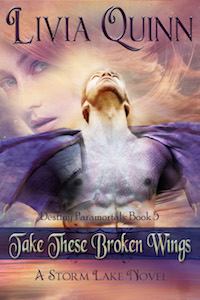 Strap in ’cause it’s a wild ride through Destiny, or should I say Middle Earth…

Five months ago, Sheriff Jack Lang would have sworn there was no such thing as vampires, tempestaeries, djinn or dragons. That was before he met Tempest Pomeroy, his sexy redheaded mail lady and trouble magnet. He’d fallen for her before he found out about her “special abilities”. But that wasn’t what turned his life upside down. No, to say Jack’s world had gone FUBAR was like saying Wolverine’s fingernails were long enough for a manicure.

Tempe had been afraid her supernatural nature would be a problem for Jack, who’d mistaken Destiny for a “Mayberry-like” small town, but that didn’t explain why he’d left her in favor of haunting the highest levees in the parish. Sure, he’d received a shock, but what was it going to take to get him to return to his life and to her? A stubborn man is one thing; a grumpy, depressed twenty-ton dragon was a bit more of a challenge.

Livia Quinn is a DC native transplanted to the bayou in Louisiana where she lives with Dusty the cajun Pomeranian, her unhandy-man, and the characters from her stories. She’s written five books about her big military family and six in the Destiny series.