Lauren Linwood’s historical romances use history as a backdrop to place her characters in extraordinary circumstances, where their intense desire for one another grows into the treasured gift of love. Her romantic suspense novels feature strong heroes and heroines who unite to defeat a clever antagonist and discover a deep, abiding love during their journey.
A native Texan, Lauren is an avid reader, moviegoer, and sports fan who manages stress by alternating yoga with long walks. She plans to start a support group for Fixer Upper addicts—as soon as she finishes her next piece of dark chocolate.

Word of Honor (Knights of Valor #1) 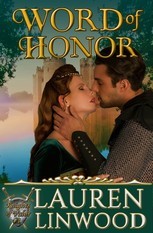 Genre Historical Romance
Book heat level (based on movie ratings): PG13
Merryn Mantel and Geoffrey de Montfort have loved each other since childhood. Once betrothed, Geoffrey leaves for the wars in France for five long years. Upon his return, the two marry and spend one blissful night consummating their love and making plans for their future.
But her new husband vanishes the next day without a trace. Merryn grieves for almost seven years—and then Geoffrey returns to her—changed from the boy and man she knew and worshipped. This stranger refuses to reveal where he has been and why he stayed away for so long.
Will her husband’s silence create a rift too large to heal, or can Merryn and Geoffrey recapture the love they once shared?

Marked by Honor (Knights of Valor #2) 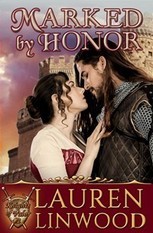 Genre Historical Romance
Book heat level (based on movie ratings): PG13
Lady Beatrice Bordel blames herself for the riding accident that cost her father his life when she was a child. Tragedy strikes again when her mother and grandfather die on the same day, leaving her homeless. The young woman decides to travel to visit her grandfather’s closest friend, hoping she can use her domestic skills and lute-playing talent to find a permanent place in his household. Barely into her journey, a band of highwaymen accosts Beatrice and her sole servant. All seems lost—until Raynor Le Roux arrives.
As a knight of the realm, the code of chivalry guides Raynor’s life. While returning to his family’s home after many months absence, he rescues Beatrice, who tells a white lie to this handsome stranger. Raynor takes her to safety at Ashcroft, but his home has changed during his time away. No longer a thriving estate, Ashcroft has fallen into disrepair because his brother Peter is no longer interested in its welfare after his wife’s untimely death. Raynor determi
nes to restore his home before he escorts Beatrice north so she may unite with the man he believes is her betrothed.
The couple’s growing attraction turns to love, but Beatrice’s dishonesty stands between her and Raynor’s happiness. Will she finally tell him the truth—and hope he forgives her deception—or will it be too late?