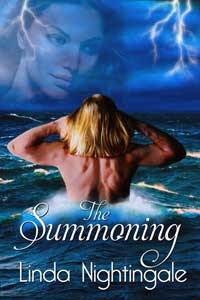 Linda Nightingale, welcome to Romance Lives Forever. I’m Kayelle Allen, author and owner of this blog. Happy to have you here! We support all furbabies, real life or fictional. We want to know all about your Fiction Furbaby, but first, please tell us about your book.

The Summoning by Linda Nightingale

Genre Fantasy Romance
Book heat level (based on movie ratings): PG13
Heather Morique is a witch. The problem is she doesn’t know it. Her husband Jahill was a refugee from an obscure branch of the Arawak Indians. After his death, mysterious whispers lure her to his homeland of Jamaica. Soon, she finds herself in a web of secrets, lies and illusions.
Jahill’s people worship Eyrael, the God of Wind and Sea, and his brother Sofiel, the God of Fire and Earth. The new Shaman has pitted brother against brother, and these two powerful spirits from an alternate universe fight to become the tribe’s ruling deity. Will light or darkness reign?
When Heather unwittingly summons Eyrael, these two unlikely soul mates face a dangerous fate. The chemistry between them is more disturbing than the long-buried secrets.

Meet Eyrael from The Summoning 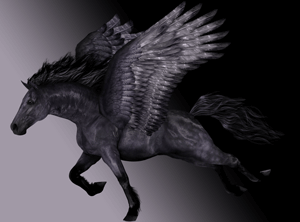 Nickname: Eyrael
Gender: Male
Species: Horse
Physical description: Large black horse with long mane and tail (Friesian)
Relationship to main character: He is the hero
Relationship to the villain/antagonist: Brother
Where this furbaby came from: Another dimension
—
What inspired you to create this character?
A picture of a beautiful Friesian horse (black with long mane and tail) pictured like Pegasus with mammoth wings in flight.
What does the main character think about this furbaby?
The furbaby is the hero. He considers the flying horse a physical representation to his people of his deity. At first, the heroine is afraid of him but when he fights to protect her and her whisks her to safety on his beautiful black wings, she falls in love with this aspect of her rescuer, a dynamic shapeshifter.
What does the villain/antagonist think about this furbaby?
In this world, the Shaman has pitted brother against brother, and Sofiel, the villain, dislikes any battle with the winged horse. He has wings and he has the weight and speed to be a formidable opponent for Sofiel’s own equine form—a more agile but slenderer Arabian.
How do other characters react to or interact with this furbaby?
The main character, the heroine falls in love with him. His worshipers prefer this shape when he is not in human form.
What is this furbaby’s natural habitat?
The beach, places outside, since the shape is a horse. Although, he can navigate indoors as long as there is enough room.
What does this furbaby add to the story?
He is the hero, and the shape of the Friesian adds the charm of the horse. Most people are drawn to the horse. Even those afraid of them, see them as beautiful and powerful. Eyrael’s equine manifestation brings the heroine to trust him quicker than his natural form—a human man with long hair the color of seafoam and crystalline eyes.
What about this furbaby will readers like, and why?
He is a beautiful, gentle and kind in animal form as he is in human form. The Friesian which inspired the shapeshifter’s shape is a docile and stunning horse.

What triggers the shift from human to animal?
The shift is totally voluntary. In the first chapter, the choice is made because Eyrael is protecting the heroine against a dark spirit and his darker Shaman, trying to sacrifice her on a stone altar. He shifts to the shape his worshipers find most appealing in his deity.
How does the shifting process happen?
He pales to transparent, shimmers and reappears as the other shape/
How does the human character think and feel about the animal side?
Once she begins to trust Eyrael, Heather, the heroine, falls in love with his equine manifestation. She asks him again and again to shift to the horse, but in the story, he never does again because the battle and the danger have escalated to the human level requiring planning ad split-second decisions. In animal form, he thinks and feels as he would in human form.
In what ways are the human and animal characters different in belief and needs?
Is the shifting process part of a deeper, mystical process (i.e., moon phases, rituals, life events)?
No, it is totally voluntary, though he and his followers worship at the full of the moon on the beach by his sea.

Where to buy The Summoning

Born in South Carolina, Linda has lived in England, Canada, Miami, Ft. Lauderdale, Atlanta and Houston. She’s seen a lot of this country from the windshield of a truck pulling a horse trailer, having bred, trained and showed Andalusian horses for many years.
Linda has won several writing awards, including the Georgia Romance Writers Magnolia Award and the SARA Merritt. She retired from a career as a legal assistant and loves events with her car club. The stars in her crown are two wonderful sons. In a former life, she must have had to walk everywhere because today she is into transportation with fine taste in expensive horses and hot cars! She likes to dress up and host formal dinner parties.
Twitter https://twitter.com/LNightingale
Facebook https://www.facebook.com/LindaNightingaleAuthor
Website http://www.lindanightingale.com – Visit and look around. There’s a free continuing vampire story.
Blog https://lindanightingale.wordpress.com/ – Lots of interesting guests & prizes
Goodreads https://www.goodreads.com/author/show/4839311.Linda_Nightingale
Pinterest https://www.pinterest.com/lbnightingale1/
Amazon https://www.amazon.com/Linda-Nightingale/e/B005OSOJ0U