Read The Series: The Adventure Of The Murdered Midwife By Liese Sherwood-Fabre @lsfabre #RLFblog #SherlockHolmes #cozymystery 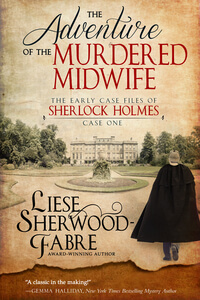 Liese Sherwood-Fabre, welcome to Romance Lives Forever. I’m Kayelle Allen, author and owner of this blog. Happy to have you here! Please tell us about your series.

Arthur Conan Doyle provided few details on Holmes’ boyhood. His ancestors were country squires, his grandmother was the sister of the French artist Vernet, and he had a brother named Mycroft – seven years his senior. Recently, a cache of documents has been discovered detailing, in Sherlock’s own hand, his early forays into criminal investigation.

Only weeks into his first year at Eton, Sherlock’s father calls him and his brother back to Underbyrne, the ancestral estate. The village midwife has been found with a pitchfork in her back in the estate’s garden, and Mrs. Holmes has been accused of the murder. Can Sherlock find the true killer in time to save her from the gallows?

This is the first of the early case files of Sherlock Holmes. The Adventure of the Murdered Midwife sets him on the path to his final career as the world’s most famous consulting detective.

My plan is to follow him to just prior to his meeting with Watson. I’m not sure how many that will involve. He is thirteen in the first, and he doesn’t meet Watson until he was 27. The first three (and the fourth planned one) span a single year. I don’t think the rest will be so close together.

At present, I have completed three and have plans for the fourth. The first three will all be out this summer. The fourth is planned for publication in 2021.

Of course, there is Sherlock, but we are also introduced to his family: Violette, his mother is a woman with a brilliant mind, but restricted by Victorian conventions from achieving her potential; Siger, his father, is loving, but remote; Sherlock’s Uncle Ernest tinkers with weapons and explosives; and his older brother Mycroft, an even greater genius than Sherlock, but a bit of a bully. We are also introduced to a young pickpocket, Constance, who develops a friendship (and possibly a bit more) with Sherlock.

I find my stories all focus on some way on belonging. In the book one, Sherlock’s first year at Eton isn’t going well, in part because he doesn’t fit in. The family must rally around Mrs. Holmes if they are to save her from the gallows and in doing so, develops deeper bonds between each other. These newfound ties will be tested but will serve them all in the later books.

The Adventure of the Murdered Midwife (Case One)

The Adventure of the Murdered Gypsy (Case Two)

The Adventure of the Deceased Scholar (Case Three)

While I had the adult Sherlock as a guide, I still had a lot I could fill in about him as a boy. It required a lot of research about the Victorian era, which was also fascinating. I learned about aspects of British life in the mid-1800s that will serve me well in trivia games in the future.

I have a thriller set in post-Soviet Russia Saving Hope, and have numerous short stories in anthologies as well as in my own collections.

You can find them either on my Website liesesherwoodfabre.com

Where to buy The Adventure of the Murdered Midwife

Liese Sherwood-Fabre knew she was destined to write when she got an A+ in the second grade for her story about Dick, Jane, and Sally’s ruined picnic. After obtaining her PhD from Indiana University, she joined the federal government and had the opportunity to work and live internationally for more than fifteen years. After returning to the states, she seriously pursued her writing career and has recently turned to a childhood passion in the tales of Sherlock Holmes.
Her writing has been recognized with a series of awards, including a Pushcart Prize nomination, a Golden Heart finalist, and a blue ribbon from Chanticleer Book Reviews. Steve Berry has called her work “Good old-fashioned, gimmick-free storytelling” and Gemma Halliday enthused her new series is “a classic in the making.” A recognized Sherlockian scholar, her essays on Sherlock and Victorian England are published across the globe and have appeared in the Baker Street Journal, the premiere publication of the Baker Street Irregulars.
Website https://liesesherwoodfabre.com
Twitter https://twitter.com/lsfabre
Facebook https://www.facebook.com/liese.sherwoodfabre
Goodreads https://www.goodreads.com/author/show/5758587.Liese_Sherwood_Fabre
BookBub https://www.bookbub.com/profile/liese-sherwood-fabre
LibraryThing https://www.librarything.com/author/sherwoodfabreliese
Amazon Author Page https://www.goodreads.com/author/show/5758587.Liese_Sherwood_Fabre
Get to know Liese Sherwood-Fabre better by signing up for an email newsletter and a FREE short story: https://liesesherwoodfabre.com/contact.html

4 thoughts on “Read The Series: The Adventure Of The Murdered Midwife By Liese Sherwood-Fabre @lsfabre #RLFblog #SherlockHolmes #cozymystery”