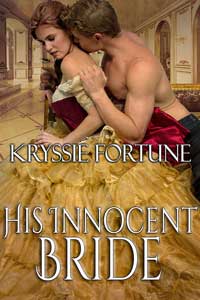 Welcome to Romance Lives Forever. I’m Kayelle Allen, author and owner of this blog. Today’s guest post is by Kryssie Fortune, author of His Innocent Bride.

Not Your Perfect Hero by Kryssie Fortune

Harry Potter? Superman? Wolverine? Or Captain America? We all have our favourite heroes. Film boyfriends are great, but to me, book boyfriends are better. I can use my imagination to fill in the gaps.
To me, heroes are always whiter than white with a strong moral compass and muscles to match. I blame it on my mother feeding me a diet of John Wayne movies when I was a kid. The thing is, they don’t make good reading.
Where would Mr Darcy be without his arrogance? Remember the boyish Lawrie in Little Women–the one we all thought Jo would marry? How wise she was to choose her professor. Lawrie would have bored her to tears. How about Dan Brown’s Robert Langdon in the Da Vinci Code? He’s quick witted and a reasonable athletic, so damn perfect you could hate him. How did Dan Brown get around it? He made him severely claustrophobic. Even Indiana Jones is scared of snakes.
Apparently, we like our heroes flawed.
So, if you’re on the quest for your next book boyfriend, consider James, Earl of Deanswood in my book His Innocent Bride. He’s a survivor, the second son who never expected to inherit. He’s spent years fighting in the Peninsular war and again at Waterloo. He’s lost good friends and seen others maimed. He cares deeply for the army’s discarded veterans.
Well respected and obscenely rich, he sounds perfect. Except, war has taken its toll. Add in that his farther and older brother drowned on a fishing trip the day the Battle of Waterloo started, and the man’s an emotional mess. He copes by checking and rechecking every detail and micromanaging his estate.
When his mother demands grandchildren, he marries to please her. His need for control seeps into his marriage. Aletha is his to cosset, protect and spank.

His Innocent Bride by Kryssie Fortune

Publisher’s Note: His Innocent Bride is a stand-alone novel which shares the Regency-era setting of Wickedly Used. It includes spankings and sexual scenes. If such material offends you, please don’t buy this book.
Consummating her marriage shouldn’t be so hard.
Raised in a dour religious sect, Alethea Allerton dreams of dancing, laughter, and love. She fell for the Earl of Deanswood within five minutes of meeting him. They married by special licence a week later, but he’d rather spend time with his mistress than bed his wife. Alethea has no idea how to seduce her husband. Desperate, she visits a house of ill-repute and hires a tutor. He agrees to meet all the costs as long as she remains blindfold throughout their lessons.
The Earl of Deanswood, a Waterloo veteran, wed Alethea to father an heir. He steps in as her tutor but he teaches her as much about spanking as sex.
Alethea survives an attempt on her life. Circumstances implicate Deanswood, and terrified, she flees London. He pursues her, and when he kisses her, she recognises the touch and taste of him. She’s hurt and humiliated by his deception.
Deanswood sets out to win back her trust. Along the way, he teaches her about ropes, spectators in the bedroom, submission, and sex toys. Only one thing mars their happiness. Someone wants Alethea dead.

Where to buy His Innocent Bride

Kryssie Fortune writes the sort of hot sexy books she loves to read. If she can sneak a dragon into her paranormal books she will. Her paranormal heroes are muscular werewolves, arrogant Fae, or BDSM loving dragons.
Kryssie likes her contemporary heroes ex-military and dominant. Her heroines are kick ass females who can hold their own against whatever life – or Kryssie – throws at them.
Kryssie’s pet hates are unhappy endings, and a series that end on a cliff hanger.
Her books are all standalone even when part of series. Plot always comes before sex, but when her heroines and heroes get together, the sex is explosive and explicit. One review called it downright sensual.
Website http://kryssiefortune.wixsite.com/kryssie
Blog http://kryssiefortune.blogspot.co.uk/
Twitter https://twitter.com/KryssieFortune
Facebook https://www.facebook.com/KryssieFortune
Pinterest http://bit.ly/1OGFnjc
Goodreads http://bit.ly/2kxqabJ
Amazon Author Page http://amzn.to/2hA0ZVO