Is It True: Marriage, Mobsters, And The Marine By Kryssie Fortune @KryssieFortune #RLFblog #Contempory #romance 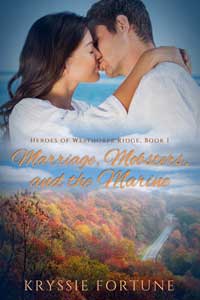 Marriage, Mobsters and the Marine) by Kryssie Fortune

Abigail Montgomery, a small-town schoolteacher with zero self-confidence, longs for the loving family she never had.
Each month she attends a masked BDSM club, but her next visit will be her last. If she doesn’t marry within the next year, her military brother won’t inherit Montgomery Hall. Desperate, she advertises for a husband.
Jared Armstrong, a former Marine sharpshooter and occasional Dom, needs $125,000 to get his family out of a hole. His solution – to marry Abigail Montgomery for her money. His only regret is his wife won’t accept his spanking lifestyle.
Soon, Abigail dreams of making their marriage real, but she promised Jared a divorce two-years after their wedding. Can they share some Christmas magic as their relationship faces extortion threats, a kidnapping, and an attempted murder? Or will Jared walk away and break her heart?

this is your first book?
No. My first book is a paranormal romance, To Wed a Werewolf. That led to a series full of hot werewolves, sexy vampires, and one cursed Fae who rides a dragon
this book is part of a series?
Yes. Marriage Mobsters and the Marine is the first novella in my Heroes of Westhorpe Ridge series. Each one features a former military man finding love in the small North Carolina town of Westhorpe Ridge. Although there are recurring characters, each book can be read as a standalone romance.
you lost sleep while writing this book?
Yes. My main publisher has shut its doors, but before they did, they put out requests for three linked stories.
I’m the sort of girl who’s always late to the party. I couldn’t think of anything that met their full criteria. Then, six weeks before the submission deadline, I had three stories in my head. I’ve never written so fast or burned so much midnight oil.
The fourth book in the series is a full-length novel, and I took my time over that.
you did research for this book?
Yes. I knew nothing about the American military and very little about North Carolina – except that it has a history of pirates. (That really mattered in the third book of the series – Desire, Deceit, and the Doctor.) Plus it has a beautiful coastline. Since Sean, the hero of Sex, Scandal and the Sheriff is a former navy Seal I needed that.
Fortunately, I have lots of Facebook friends in North Carolina who didn’t mind me hounding them with questions. I did worry I’d get American agents hammering on my door when I started researching military bases in North Carolina, though.
some characters in this book are not human? (pets for example)
There’s Duffy, Sean’s dog. He’s a collie and crops up in the first three books. He’s important in Desire Deceit and the Doctor since he helps save a child who had fallen over a cliff.
this book has more than one genre?
Yes. I like my stories to feature more than just scorching hot sex. Each book is an adventure and romance.
you speak more than one language?
Yes, badly. I learned French in school and can make myself understood in France if I have to. I prefer to point and smile, though.
you grew up where you live now?
No. I grew up in a housing estate in Leeds, West Yorkshire. There was plenty of green space and loads of trees to climb. I stayed in Leeds until I retired then moved to the Yorkshire Coast. A few of my paranormal romances start in Whitby or Scarborough, close to my new home.
you love to read?
Yes. I’d get withdrawal symptoms if I didn’t have a fully loaded kindle.
you are never late?
No, not if I can help it.
you love pizza?
Yes, as long as it’s homemade. I love breadmaking, and pizza base is a doddle. Then we get creative with the toppings.
you love sushi?
No. I don’t mind vegetable sushi, but the thought of raw fish – other than smoked salmon – turns my stomach.
you have a pet?
No, but I’d like one. I a Welsh Terrier as child. He looked like a teddy bear on legs, but he was as fierce as he was small (14 inches). When the kids were little we had cats, and I’d have another now, but we shoot off to babysit grandkids on a monthly basis. It’s not fair on the animal to constantly put it in kennels.

Where to buy Marriage, Mobsters and the Marine

Amazon www.amazon.com/Marriage-Mobsters-Marine-Heroes-Westhorpe-ebook/dp/B07DYZPF4C/
Or read for free on Kindle Unlimited.

Kryssie Fortune writes the sort of hot sexy books she loves to read. If she can sneak a dragon into her paranormal books she will. Her paranormal heroes are muscular werewolves, arrogant Fae, or BDSM loving dragons.
Kryssie likes her contemporary heroes ex-military and dominant. Her heroines are kick ass females who can hold their own against whatever life – or Kryssie – throws at them.
Kryssie’s pet hates are unhappy endings, and a series that end on a cliff hanger.
Her books are all standalone even when part of series. Plot always comes before sex, but when her heroines and heroes get together, the sex is explosive and explicit. One review called it downright sensual.
Website http://kryssiefortune.wixsite.com/kryssie
Blog  http://kryssiefortune.blogspot.co.uk/
Twitter https://twitter.com/KryssieFortune
Facebook https://www.facebook.com/KryssieFortune
Pinterest http://bit.ly/1OGFnjc
Goodreads http://bit.ly/2kxqabJ
Amazon Author Page http://amzn.to/2hA0ZVO

2 thoughts on “Is It True: Marriage, Mobsters, And The Marine By Kryssie Fortune @KryssieFortune #RLFblog #Contempory #romance”