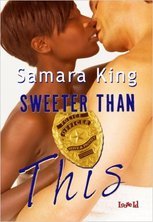 Today’s featured book is Sweeter Than This by Samara King.

Title  Sweeter Than This
Genre  Interracial Romance
Author  Samara King
Book heat level (based on movie ratings G, PG, PG13, R): R
With her best friend murdered, the man believed to be partly responsible under the nose of her gun and a stranger looming in the shadows out for blood, Officer Elle Taylor is running out of time and people to trust. Will Elle risk crossing the line between attraction and revenge to take help from an unexpected source, before the murderer strikes again and leaves her life in flames?
Durant Kane is no stranger to trouble, especially the kind that comes with a gun trained on his face and an angry woman attached. But Elle’s something different, something unexpected and sweeter. He never could have imagined coming to feel so deeply about her, even if his own disastrous path in relationships hadn’t left him so wary. But he’ll have to take the risk if he doesn’t want to lose the woman he’s come to realize he can’t even think of living without.

Samara King is the author of over twenty published novels, novellas, short stories and as well as poetry. Since her days of sneaking romance novels to the back of the library in grade school; romance fiction has been a consistent staple in Samara’s world, soon after, the desire to write her own tales unfolded. In 2011, she was nominated for Poet of the Year by African Americans On The Move Book Club and is a member of The Romance Writers of America and several sister chapters.
Samara has penned sexy tales for a host of publishers and also self­publishes under her imprint, Crave Novellas. Previously she co­hosted SoundNOff, a poetic format for poets and spoken word artists and hosted InCharacterN10, a former showcase for authors on Blogtalkradio.com/samaraking. Samara’s first poetry collection, The Ebony Kryptonite, was well received and was followed with Stripped Barefoot, a sultry mix of poetry and spoken word, which went on to reach #20 in Chicago’s Top 40 on Reverbnation in September 2013.
Currently, Samara is hard at work on her next series.