Bringer Of Chaos: The Origin Of Pietas By Kayelle Allen #RLFblog #SciFi #Pietas 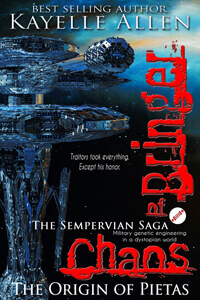 Today’s featured book is Bringer of Chaos: the Origin of Pietas a science fiction novel by Kayelle Allen.

Why should Pietas end the war with humans?

His people are winning, yet they insist on peace talks. The Ultra people want to grant humans a seat on the Council. Pietas ap Lorectic, Chancellor of the High Council, War Leader and First Conqueror, disagrees. What’s best for mortals is oppression, control, and if necessary, elimination.

Pietas seethes with rage at the idea of human equality. Humans might have created Ultras, but the creation has far surpassed the creator. Humans die. Ultras are reborn, no matter how grievous the injury. They have no equals.

His people permit him no choice. He must attend these insipid peace talks on Enderium Six and what’s worse, be polite. To humans.

When a human special ops warrior is killed in battle, he’s resurrected in a secret process and inducted into the Ghost Corps. He’s given enough strength to perma-kill immortal Ultras. Ghosts are the most hated and feared of warriors.

When the ghost entraps and captures Pietas at the peace talks, the two begin a long journey toward Sempervia, an isolated and forgotten world. Once there, Pietas is marooned and the ghost abandoned alongside him. The two must either fight to perma-death, or join forces to survive.

Kayelle Allen did a tour in the US Navy, where she climbed around airplanes (on the ground, thankfully) fixing black boxes that helped pilots find their way home. She wrote her first science fiction novel at 18 and to this day, it’s hidden under the bed, where she vows it will remain. Gems from it, however, launched several series in her galaxy-wide universe of stories. From childhood, Kayelle was the victim of an overactive imagination and inherited the Irish gift of gab from her mother. From her father, she got a healthy respect for mechanical things. No wonder she writes Science Fiction and Fantasy peopled with misbehaving robots, mythic heroes, role playing immortal gamers, and warriors who purr. She’s been married so long she’s tenured.

One thought on “Bringer Of Chaos: The Origin Of Pietas By Kayelle Allen #RLFblog #SciFi #Pietas”