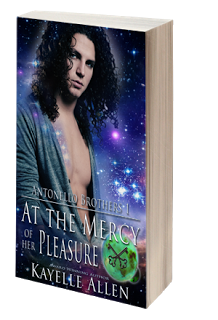 Today we’re reading about NarrAy Jorlan from At the Mercy of Her Pleasure by Kayelle Allen. Tell us about your book.

Hired to steal back a prototype taken by the imperial armada, Senth Antonello retrieves it, but his brother is kidnapped to force Senth to surrender the device.
Now he has to rescue his brother, outsmart the armada, and keep the item out of imperial hands. All doable, except for one small problem. He must do it in the company of NarrAy Jorlan, a genetically altered woman whose pheromones could enhance the mission or crumble it into dust with a single siren kiss.

Profession: Captain in the All People’s Liberation Army (a rebel)

This heroine is at a party. Considering her story, describe the party.

NarrAy’s story starts out with her wearing a hot red party dress so she can fit in at a night club. She’s there undercover to meet and hire a professional thief. The place is crowded to the max.

How does the heroine feel about being this particular party, and what body language is she displaying that gives it away?

She is not happy about being there and stands above the crowd on a hotel balcony, her arms crossed while she taps one foot.

Is she more likely to mingle or remain aloof?

NarrAy is not shy, but because her kind is addictive, they are forbidden access in society. She stays away from crowds.

If she drinks, what is her drink of choice at this party?

She’s too aware of her pheromones and how they affect others to risk getting drunk. She drinks something that looks alcoholic but isn’t.

How much drink is her usual?

She sometimes has a glass of wine with dinner. That’s it.

The heroine figures out where the hiding places are and then goes there. Is it to hide, to avoid someone, or to go drag a friend back to the party?

She’s avoiding anyone and everyone. Not only is her kind forbidden to mingle with others, they are not allowed to touch anyone either.

Is she likely to latch onto a friend and stay with him/her and ignore others, or is she the friend that others latch onto?

Others go stand beside her. She is the strong, silent type.

If someone picked a fight at this party, how is the heroine going to handle it?

Physically, she is tiny. However, all she has to do is release her pheromones and anyone in the vicinity will go glassy-eyed and slack-jawed. She’s not afraid of anyone no matter how big they are. Literally, no one can touch her if she doesn’t want them to.

Is the heroine the one most likely to get tossed out of the party, or the one who does the tossing?

She would do the tossing.

Will she know when to leave, or stay late and make a nuisance of herself?

She’s often the first to leave, unless she’s meeting someone on a covert mission or op. 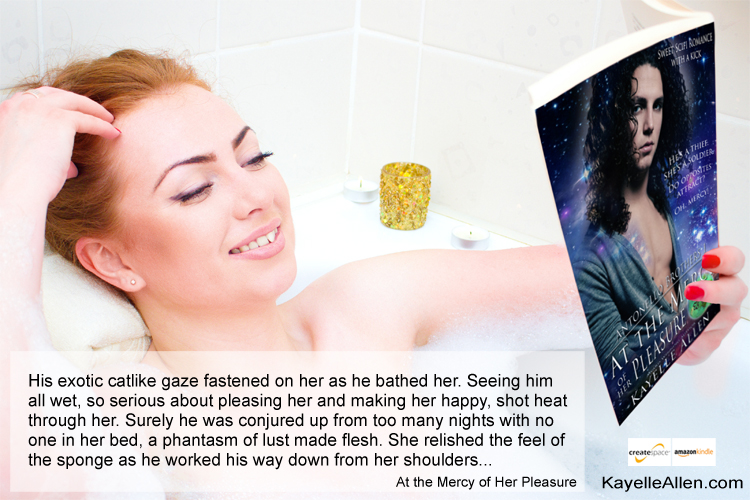 How does the heroine handle it if the cops or some other authority figure pulls her aside when she was blameless in a situation?

She’s meek and demure and does not argue. However, she will not allow herself to be detained unjustly. It’s not something she’s proud of, but she can overpower with her pheromones and use her voice to control others. If she’s angry, the combination can kill.

How does the heroine react to hearing a scream?

She seeks backup if possible, but if she can’t, she will still investigate.

If she sees someone being assaulted, what is the FIRST thing that crosses her mind?

Protect the person. Then punish the assailant.

If she sees someone being assaulted, what is the FIRST thing she does?

Take a second to assess the situation. She does not leap blindly into anything, but she’s quick to decide and once she has, she doesn’t pull back.

This heroine attempts to rescue someone and realizes that she is in over her head. The odds are against her and there is no way out. She is going to get her butt handed to her. What does she do?

NarrAy will use her pheromones and voice to take command of the situation. She avoids that if possible.

The heroine runs into the one person from her past she wanted to avoid. She can’t get out of the situation and must interact with him/her in some way. What does she do?

She gets stiff and formal, retreats behind a wall of polite iciness and waits for the person to leave. If it looks like they aren’t, she makes excuses for leaving and gets out of there.

Someone younger than the heroine is in charge of the situation, and they are handling it badly, perhaps bungling things. How does the heroine deal with it?

She comes alongside, talks to them, and if she outranks them (she’s a captain, after all) she will direct them as to how to fix the situation and proceed.

The heroine is in physical pain but must bear up under it and keep going. What does she tell herself in order to get through the situation?

Pain is fleeting. Honor is forever.

“Think, assess, and then act without regret.”

What lesson from her past gets her through a stressful situation?

When her parents were killed and their belongings confiscated by the Tarthian Empress, she considered it the worst day of her life. From the moment she heard what had happened, she knew she had to take back what was stolen and honor her parents’ legacy. She reminded herself daily, sometimes hourly, that she would make them proud.

Where can we find your book online?