He’s been alone for twelve thousand years. When will he find someone capable of loving him back? In Surrender Love by Kayelle Allen, Luc Saint-Cyr faces the chilling thought of eternity alone.

This immortal alpha male is the most powerful man in an intergalactic empire of 22 planets. But Luc is alone, life after life. When will he find someone who loves him back?

Izzorah hides his illegal status and the fact he’s almost blind. He can confide in no one for fear of being cast out.

When they meet, an instant attraction develops. Izzorah’s visa status is fixable, but only Luc’s immortal blood can heal him. Luc might risk violating the highest and most serious law among the immortals, but to bring his beloved closer means revealing the truth of what he is, and that means baring every damning secret, every twisted truth, and 12k years worth of dirty hidden lies…

Luc owns a few restaurants that provide music and dancing. He’s likely to go find someone to dance with. Or he’ll attend a party. He has an extensive social life, but few really close friends.

A hamburger, and he loves pizza and spaghetti, but his go to meal is a steak and potato.

Formal or business attire. He has some casual wear, but even his casual outfits are dressy. He lived with a fashion model for five years and one of his friends is a trendy designer.

He’s not technical. If something breaks he’s going to look around for someone to help. But if it’s a physical thing, like constructing a house or bridge, then he’s your man. He’s done a lot of jobs in the twelve thousand years he’s been alive, but technology is beyond him.

He tried to apologize to someone without realizing that person didn’t know Luc was the one who’d made the mistake. Luc wasn’t aware that someone else had taken the blame to spare him embarrassment. Once the person knew, they blew up and screamed in his face, and refused to let him make amends. They thought he’d been hiding behind someone else. He never got to explain, and it bothered him that the person passed away still angry.

He has an adopted son who’s been with him since age three and is now about twenty. Luc has gotten much better about being around kids, but he’s still afraid of bumbling something or dropping one. 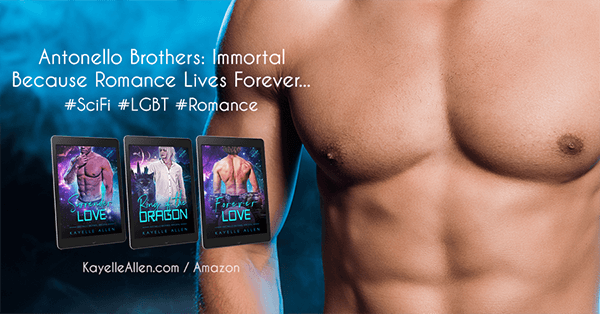 Once his eyes open he’s up. Wide awake.

Careful. Whenever humans find out that the blood of an Ultra can heal, the life of an Ultra changes to a life on the run.

He delegates with ease and always comments on a job well done.

Nothing would stick. His body rejects anything foreign.

Luc has a fleet of vehicles for his personal use, and an android driver who’s ready to go when Luc is. Also a fleet of spacecraft. Did I mention he’s wealthy?

Recycle always. He cares about the environment and makes sure his companies are towing the line on waste and pollution.

Where to buy Surrender Love

The sequels, Ring of the Dragon and Forever Love are on preorder on Amazon.

Kayelle Allen writes Sci Fi with misbehaving robots, mythic heroes, role-playing immortal gamers, and warriors who purr. She is the author of multiple books, novellas, and short stories. She’s also a US Navy veteran and has been married so long she’s tenured.
Sign up for her newsletter and free Sci-Fi stories, book recommendations, a chance to become a Tarthian Empire citizen (and an immortal) plus other reader exclusives https://kayelleallen.com/reader-groups/
Twitter http://twitter.com/kayelleallen
Kayelle’s Keepers http://facebook.com/groups/KayellesKeepers
Facebook http://facebook.com/kayelleallen.author
Bookbub https://www.bookbub.com/authors/kayelle-allen
Goodreads https://www.goodreads.com/author/show/710889.Kayelle_Allen
Amazon https://www.amazon.com/Kayelle-Allen/e/B003ZRXVN8