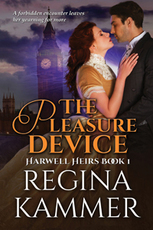 Title The Pleasure Device (Harwell Heirs Book 1)
Genre Historical erotic romance
Author Regina Kammer
Book heat level (based on movie ratings): R
In Victorian London of 1879, a new device for the treatment of hysteria has just arrived from France. Dr. Julius Christopher plans to use the invention for his own salacious scheme. Can Dr. Nicholas Ramsay prevent his beloved, the virginal debutante Helena Phillips, from being the next patient?
The Doctor and The Debutante
Nicholas Ramsay, renouncing his aristocratic heritage and dark past, has chosen a career as a doctor. He arrives in London ready to embark upon his practice and find a suitable wife.
Helena Phillips, born into scandal and disgrace, is making her London debut. To atone for the circumstances of her birth, she must find a titled husband—no less than an earl will do.
A Dangerous Passion
Nicholas and Helena’s chance encounter during the Season leads to a dangerous attraction–and forbidden explorations. A taste of passion leaves Helena longing for more, and her lovesick wretchedness is confused for hysteria, a mysterious ailment afflicting many Victorian women.
A Devious Scheme
Dr. Julius Christopher’s new electro-mechanical vibrating machine for the treatment of hysteria is the perfect device to test his radical theory of female sexuality. To fully explore his hypothesis, he requires a virgin and seeks to ensnare Helena for his experiment.
Can He Save Her?
Nicholas is determined to rescue Helena from the clutches of Dr. Christopher. But to prove he is worthy of Helena’s hand, Nicholas must reconcile with his past, embrace his future, and show her pleasure is more profound when coupled with love.
The Harwell Heirs
Victorian aristocracy has very strict rules concerning marital connections and familial obligations. But the Harwell heirs—Helena, Sophia, and Arthur—discover love doesn’t always follow the rules. Scandalous affairs force these scions of society to choose between duty and desire, deference and destiny.
Book 1: The Pleasure Device
Book 2: Disobedience By Design
Book 3: Where Destiny Plays 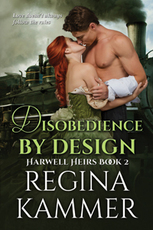 Title Disobedience By Design (Harwell Heirs Book 2)
Genre Historical erotic romance
Author Regina Kammer
Book heat level (based on movie ratings): R
In 1860, the railways of Victorian England transport American stevedore Joseph Phillips to the lush countryside of Lincolnshire…and into the arms of Lady Sophia Harwell. But Sophia is betrothed to a violent villain who wants only two things: her virginity and her dowry. Can Joseph save his beloved without scandalizing upper-class British society?
The Lady…
Lady Sophia Harwell has just been presented to Society—and its eligible bachelors—and is quite unimpressed. Her parents are encouraging the suit of the Duke of Royston, a man older than her father! Yet free-spirited Sophia is smitten with Joseph, her brother’s handsome American business partner, a man who introduces her to sensual delights beyond the bounds of propriety and the dictates of her social standing.
…And The Laborer
Joseph Phillips is out of his depth amongst the British aristocracy trying to secure investors for his American railroad enterprise. To make matters worse, he can’t keep his hands off his business partner’s sister. Sophia is far out of his league and expected to marry a duke. But when the duke reveals his villainy, Joseph decides some risks are worth taking, and, to protect Sophia, he embarks upon a partnership of an entirely unexpected nature.
The Harwell Heirs
Victorian aristocracy has very strict rules concerning marital connections and familial obligations. But the Harwell heirs—Helena, Sophia, and Arthur—discover love doesn’t always follow the rules. Scandalous affairs force these scions of society to choose between duty and desire, deference and destiny.
Book 1: The Pleasure Device
Book 2: Disobedience By Design
Book 3: Where Destiny Plays