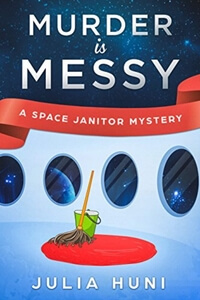 Julia Huni, welcome to Romance Lives Forever. I’m Kayelle Allen, author and owner of this blog. Happy to have you here! We’re excited to find out more about your heroine, but first, tell us about the book.

Murder is Messy: Space Janitor One by Julia Huni

Genre Science Fiction Cozy Mystery
Book heat level (based on movie ratings): PG
In space, no one can hear you clean.
Most people want fame and fortune, but not Triana Moore. She prefers programming maintenance bots and eating vendo food in the solitude of the space station’s control center. But when a highly connected security agent interrupts her routine with stories of murder and missing bodies, Triana can’t ignore him; it’s cooperate or find a new job. A girl has to pay the rent, even on a crappy studio compartment.
Since working with a shiny detective beats a shuttle dirt-side, Triana lends her programming skills to Agent O’Neill’s investigation. Together, they find more victims and evidence of a major cover-up. A killer with a clean-up crew means money—lots of money, and connections—just the kind of notice Triana tries to avoid. Following the clues leads them to the wealthiest levels of the station, uncovers long-hidden secrets, and puts the killer on notice.
It will take all Triana’s technical talents, most of O’Neill’s connections, and some really excellent croissants to stop the murders, save her job, and ultimately, her life.

Know the Heroine from Murder is Messy: Space Janitor One

Here are some fun questions to help us know your heroine.
It’s late, she’s bored. What does she do?
Triana loves to watch videos, especially early 21st century sci-fi shows like StarTrek, Battlestar Galactica, or Guardians of the Galaxy.
What kind of food would she impulse buy if hungry?
Triana will eat just about anything and everything. Her favorites are noodles from Hot-Good Noodles, pierogis from the Happy Poel, and chocolate from Dolce Amour. Or really, any chocolate.
Describe the kind of clothes she prefers to wear.
Her favorite clothing is her Station Kelly-Kornienko maintenance coverall. It’s drab brown, with a station patch on the shoulder, but it’s soft, comfy, and stain resistant. It also doesn’t require any jewelry or accessories.
Does she know how to fix things?
Triana can fix anything computer related. She’s not so good at fixing dinner.
She tried to do something and it went badly. Tell us about it.
Triana tried to hack her holo-ring so the station operating system wouldn’t be able to track her. Unfortunately, this meant doors would no longer open, lights turned off when everyone else left the room, and she couldn’t order noodles at her favorite restaurant.
How does she act around children she doesn’t know?
She likes to think she’d be like the cool aunt who takes her sister’s kids places their parents would never let them go. In reality, there are very few children on SK2, so she’s kind of uncomfortable around them.
What is she like first thing in the morning?
Triana is quiet until she gets her first cup of coffee, but she’s not cranky. She’s also not particularly peppy.
How does she act around people who don’t know what she is?
Nobody really knows what she is. So, either her whole life is an act, or she just acts like herself. Even she isn’t sure which is true.
Will she let a worker handle things or do it herself?
She’s really independent. Most things she wants to do herself, but sometimes she manages to screw them up.
Earrings/piercings/tattoos or unadorned skin?
Triana doesn’t have any piercings or tattoos, but, in her world skin and eye color can be changed by an esthetician. Triana’s roommate, Kara, does skin and hair mods, and in the second book of the series, she learns eye mods. She loves to practice on Triana.
Personal vehicle or public transport?
She lives on a space station, so neither. Although in book 2 they go dirtside, ride a HyperLoop and later rent a bubble.
Recycle or toss?
Always recycle. The station is green!
Thanks for helping us get to know your heroine!

Where to buy Murder is Messy: Space Janitor One

Julia Huni grew up in the Pacific Northwest, and after twenty years roaming the country with the Air Force, she’s back. She has a husband, three kids and a dog named Pippin.
She’s been an IT guy, a choir director, an executive assistant, a stay-at-home mom, a college instructor, and that lady at the information booth in a tourist town. But writer is the best job ever, because she gets to make stuff up. Stuff she wishes were true, stuff she’s glad isn’t true.
When she’s not writing, or working at her day job at the college, she likes to knit, and bake crazy cakes for her kids’ birthdays. She also loves to travel.
Website https://juliahuni.com/
Blog https://juliahuni.com/blog/
Twitter https://twitter.com/HuniJulia
Facebook https://www.facebook.com/TrianaMooreSpaceJanitor/
Goodreads https://www.goodreads.com/author/show/18210809.Julia_Huni
Amazon Author Page https://amazon.com/author/juliahuni
Newsletter https://juliahuni.com/sign-up/

3 thoughts on “Know The Heroine From Murder Is Messy: Space Janitor One By Julia Huni @HuniJulia #RLFblog #CozyMystery #SciFi”