Jaine Andersen From Fooling Around With Cinderella By @stacyjuba #RLFblog #chicklit 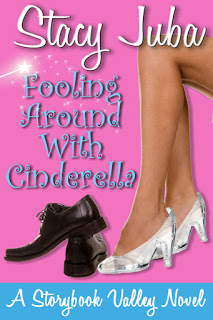 Stacy Juba shares details about the creation of Jaine
Andersen in the book Fooling Around With Cinderella.

Title Fooling Around With Cinderella
Genre Chick Lit/Sweet Romance
Author Stacy Juba
Book heat level (based on movie ratings): PG13
What happens when the
glass slippers pinch Cinderella’s toes?
When Jaine Andersen proposes a new marketing role to the
local amusement park, general manager Dylan Callahan charms her into filling
Cinderella’s glass slippers for the summer. Her reign transforms Jaine’s
ordinary life into chaos that would bewilder a fairy godmother. Secretly dating
her bad boy boss, running wedding errands for her ungrateful sisters, and
defending herself from the park’s resident villain means Jaine needs lots more
than a comfy pair of shoes to restore order in her kingdom. First in the
Storybook Valley series, a blend of sweet romance, chick lit, and fairy tale
fun.

Name: Jaine Andersen
Age: 25
Gender: Female
Birthplace: Catskills of NY
Profession: Eager marketing coordinator for a theme
park/temporary and very reluctant Cinderella
Ethnicity/Species (if not human): Human
Describe his/her body build, skin tone, height and weight.
Include any unique features such as dimples, freckles, or scars: Sandy caramel
hair that can’t decide whether it is brown or blonde, blue eyes, and glasses.
Slender, but didn’t quite fit into the outfit she wanted to wear on her job
interview.
Who is the significant
other in your character’s life?
Dylan Callahan
Tell us about this
character, please.
Dylan is the general manager of the Storybook Valley Theme
Park and recently hired Jaine for a marketing position, and to assist with a
Cinderella crisis. A former ski instructor, he has a reputation as a bad boy
heartbreaker. He never showed much interest in his family’s theme park in the
past, and has a lot to prove. Dylan tries to fight his attraction to Jaine so
that he can focus on business.
How does your hero
dress?
While working as Cinderella, she wears a ball gown so puffy
that helium could have inflated it. Gleaming pearls and silver thread embroider
the rich gold. She also wears a blonde Gibson Girl wig and a tiara.
How educated is this
character?
She has a bachelor’s degree in marketing.
What is your
character’s family like?
She has two annoying sisters, twins Bree and Shauna. Bree is
a high-powered attorney and Bridezilla with an upcoming wedding. Shauna, a
divorced single mom, relies on Jaine for babysitting. In fact, the twins rely
on Jaine for all their errands.
If someone from your
character’s past showed up, who would he most NOT want it to be, and why?
Someone from her past does show up, an old high school rival
named Gabrielle Allaire. Gabrielle always bested Jaine in high school, whether
it was getting a higher grade on a test, landing a college scholarship, or
winning a class office. Now she works in a leadership role at the theme park
and acts as if she has authority over Jaine.
Can your hero keep a
secret (why or why not)?
Her biggest secret is that she is helping out as Cinderella
for a few months, before assuming a full-time marketing position. The park has
had a string of bad luck with Cinderellas and Dylan is tired of fooling around
with Cinderella. Jaine’s sisters would make fun of her if they knew so she
keeps it a secret from her family.  So
yes, she is extremely good at keeping secrets.
What inner doubt
causes your character the most difficulty?
She always takes care of everyone else, putting their needs
before her own. She fears that focusing on her own needs is selfish.
What is your hero’s biggest
hopes and dreams?
To become marketing director of the theme park and to live
happily ever after with Dylan.
What is your hero’s
breaking point?
When she is sabotaged at work, and her reputation is in the
gutter.
What is the hardest
part about playing Cinderella?
Having kids wipe sticky ice cream hands on my dress,
teenagers who ask me stupid questions for You Tube videos, and aching feet from
the glass slippers.
Who is your closest
friend at Storybook Valley?
Krystal, the wardrobe supervisor. Krystal amuses me as she
also likes to dress up as Red Riding Hood. She wears a Red Riding Hood costume
to work. Voluntarily.
What kind of training
went into playing Cinderella?
Dylan’s grandmother was obsessed with making me the perfect
Cinderella. I had to learn to master Cinderella’s signature, practice a proper
princess wave, get used to always staying in character, and watch Audrey
Hepburn movies to absorb the regal way she carried herself.

Why do you think your
writer chose to write about you?
She has spent a lot of years writing murder mysteries. They
are intriguing whodunnits, but I think Stacy felt like writing about something
more cheerful, hence a theme park Cinderella.
What do you wish your
writer had not told others about you?
I wish she hadn’t mentioned the difficulties of using the
toilet in a ball gown.
What other character
from your book do you think your writer should write a book about, and why?
I know she is working on a book about Rory, Dylan’s sister,
who is named Aurora after Sleeping Beauty. I think she should also write about
my friends Krystal and Tiara, as a start. I also want her to write a short
story leading up to how Dylan got himself into such a princess problem.
Why do you think your
writer loves to write?
She has always been on the quiet side, and writing has been
a way for her to express herself since she was a child. Stacy also loves to
read – she is obsessed with books.
Is there anything
you’d like to say to your writer?
I had so much fun appearing in this book and I can’t wait to
return to Storybook Valley as a supporting character in Prancing Around With
Sleeping Beauty and the other books in the series.

Stacy
Juba got engaged at Epcot Theme Park and spent part of her honeymoon at
Disneyland Paris, where she ate a burger, went on fast rides, and threw up on
the train ride to the hotel. In addition to working on her new Storybook Valley
chick lit/sweet romance series, Stacy has written books about ice hockey, teen
psychics, U.S. flag etiquette for kids, and determined women sleuths. She has
had a novel ranked as #5 in the Nook Store and #30 on the Amazon Kindle Paid
List. When she’s not visiting theme parks with her family, (avoiding rides that
spin and exotic hamburgers) Stacy helps writers to strengthen their manuscripts
through her Crossroads Editing Service. She is also the founder of the Glass
Slipper Sisters, a group of fifteen authors with Cinderella-themed romance
novels. She is currently writing the next book in the Storybook Valley Series,
Prancing Around With Sleeping Beauty.