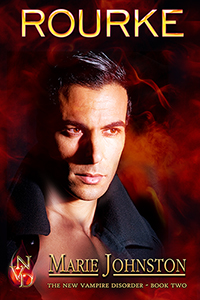 Marie Johnston lives in the upper-Midwest with her husband, four kids, and an old cat. Deciding to trade in her lab coat for a laptop, she’s writing down all the tales she’s been making up in her head for years. An avid reader of paranormal romance, these are the stories hanging out and waiting to be told, between the demands of work, home, and the endless chauffeuring that comes with children.

Why did you write this book?
The series started with Demetrius. He appeared in my first series, The Sigma Menace, and as soon as I wrote him, I knew he had a story. As that series progressed, the sexy vampires demanded their own series. That Demetrius had to be the first book was obvious to me, and as I wrote each vampire told me their order. Rourke said he was next, and I was excited to write him.
What is your favorite genre to read?
Hands down—paranormal romance. I started out reading fantasy and when I realized I kept scrounging books, looking for the romance, it dawned on me. Why not just read romance? I cruised through every genre and settled on paranormal although I do dabble in contemporary. However, a well written romance captures me no matter the genre.
Who is your favorite character from fiction (not including your own)?
When I was young, I l-o-v-e-d The Blue Sword. It had such an impact that decades later, I’d have to say the heroine Harry Crewe is my favorite. Stolen young girl trained to be a warrior and falls in love with the hot dude who stole her. Lots of tropes and I loved all of them.
What are you working on at the moment, and will see from you in coming months?
After The Sigma Menace, I decided to take my world in two directions. I don’t know that it was the best decision, though. When I finish one book, I’m so hyped to write the next in the series, buuuut I’m flip-flopping back and forth. Now that Rourke, book 2 from the New Vampire Disorder, is released, the next book is Ancient Ties from Pale Moonlight. I do enjoy writing the Pale Moonlight books because they are standalone reads in the same world with familiar characters.
Please tell us about your latest book.
Grace Otto was a vampire child adopted by humans and raised in a secluded but loving environment. When she stumbles across their murders, she comes face to face with Rourke, the male who’s haunted her nightmares, who might have killed her birth family. It’s not long before she realizes the mysterious male is not the one responsible for her parents’ demise, but their pasts are irrevocably linked and she’s forced to leave the human world to find out how.
Around Grace, Rourke dares to think of a better future, one that can overwrite his traumatic history. Until she unwittingly commits an act of betrayal that threatens her and their entire species. To save Grace, Rourke will need to hunt down the demons of their past.