A Countess Most Daring By Jessie Clever @JessieClever #RLFblog #RegencyRomance 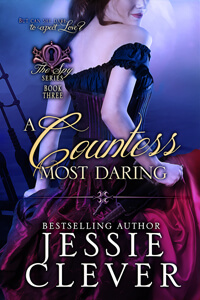 Today’s featured book is A Countess Most Daring, a Regency romance by Jessie Clever.

Fans of both historical romance and historical women’s fiction will love this smart, witty, and suspenseful series from bestselling author Jessie Clever. If you like Lauren Willig, Deanna Raybourn, or Amanda Quick, you’re going to fall in love with this author.
Katharine Cavanaugh, the Countess of Stirling, has always lived according to the expectations of her heritage. The daughter of a revered naval captain and accomplished British spy, Katharine has always done what others expected of her without ever wondering what she expected of herself.
American mercenary Matthew Thatcher has spent his life running away from every expectation he has for himself. Fleeing from a tragedy he believes his careless youth caused, Thatcher is more than willing to offer his services to the highest bidder, no matter the danger.
But when their latest mission from the British War Office goes wrong and they find themselves trapped behind enemy lines in Naples during Napoleon’s last push for European domination, they must decide if they dare to realize the greatest expectation of all: the expectation of love.
The books in the Spy Series:
1/2. Inevitably a Duchess (A prequel novella)
1. Son of a Duke
2. For Love of the Earl
3. A Countess Most Daring
4. To Save a Viscount

Jessie decided to be a writer because the job of Indiana Jones was already filled.
Taking her history degree dangerously, Jessie tells the stories of courageous heroines, the men who dared to love them, and the world that tried to defeat them.
Jessie makes her home in the great state of New Hampshire where she lives with her husband and two very opinionated Basset Hounds.