To Be A Duke By Jessie Clever @JessieClever #RLFblog #Regencyromance 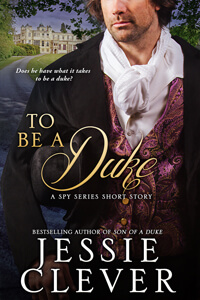 Today’s featured book is To Be a Duke, a Regency romance by Jessie Clever.
Fans of both historical romance and historical women’s fiction will love this smart, witty, and suspenseful series from bestselling author Jessie Clever. If you like Lauren Willig, Deanna Raybourn, or Amanda Quick, you’re going to fall in love with this author.
Alec Black, the Earl of Stryden, sees the inevitable and does his damnedest to ignore it.
When another crop infestation at the family’s estate in Bedford collides with a promotion from the War Office, Alec is torn between his duty to his heritage and his duty to the crown. Matters become more complicated when his nephew, Samuel, demands of him a seemingly outrageous and impossible favor that relies on Alec’s seat in the House of Lords.
But when a common footpad threatens his wife, Sarah, Alec must face what it really means to one day be a duke.
The short stories in the Spy Series:
1.To Be a Spy
2.To Be a Duke
3.To Be a Lady
4. To Be a Debutante
The Spy Series short stories take place after the conclusion of the Spy Series.
Genre Regency romance
Book heat level (based on movie ratings): PG
Publisher Someday Lady Publishing, LLC
Amazon http://amzn.to/2qz1tBY
Barnes and Noble http://bit.ly/1FmkFiJ
Kobo http://bit.ly/1JTHwtV
Smashwords http://bit.ly/2q3RYXK

Jessie decided to be a writer because the job of Indiana Jones was already filled.
Taking her history degree dangerously, Jessie tells the stories of courageous heroines, the men who dared to love them, and the world that tried to defeat them.
Jessie makes her home in the great state of New Hampshire where she lives with her husband and two very opinionated Basset Hounds.