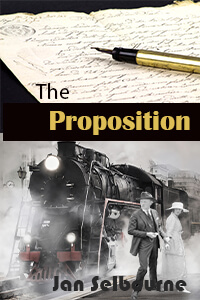 Jan Selbourne, welcome to Romance Lives Forever. I’m Kayelle Allen, author and owner of this blog. Happy to have you here! We’re excited to find out more about your hero, but first, tell us about The Proposition

The Proposition by Jan Selbourne

War changes a man. For Harry Connelly it’s down to a bullet on the Western Front or arrest and prison at home – until, badly wounded, he collapses beside the body of Andrew Conroy. Same build, same colouring, illegitimate, no known family. It’s his only hope -what does he have to lose – Harry swaps identity discs.

Now Andrew, he’s just another face in post war London until a letter. A cousin from the dead soldier’s unknown family wants to meet, to make amends. Barely surviving on his pension, ‘Andrew’ agrees and is presented with a shocking proposition. Accepting is out of the question, refusing pushes him into a nightmare of murder and blackmail and a very frightened Lacey Haines.

Lacey is barely coping with the consequences of her sister’s treachery until Andrew saves her from a vicious assault. Can she trust him with her secrets which could kill them both?

Know the Hero from The Proposition

He left the war as another man and now he must live this lie without a mistake. The pub is the only place to go, where no one takes any notice of him.

Roast beef, if he can afford it

Yes, he can turn his hand to most things,

An invitation to meet the dead soldier’s unknown cousin was fraught with risk, but he’s almost broke and desperate and agrees. The meeting goes well until a ghastly proposition plunges him into murder and blackmail – but there’s no turning back. Stealing a dead soldier’s ID is a hanging offence.

He has a real soft spot for children.

Miserable with the life he’s brought upon himself, until he meets Lacey who is hiding more secrets than he is.

How does he handle things when in a “proper” social situation?

Very well, although he constantly reminds himself that he is now Andrew and can never let his guard down.

He takes care of himself.

Sleeves buttoned or rolled up?

Car, train or by foot.

Where to buy The Proposition

Jan Selbourne grew up in Melbourne, Australia. Her love of literature and history began as soon as she could read and hold a pen. Her career started in the dusty world of ledgers and accounting then a working holiday in the UK brought the history to life. Now retired, Jan can indulge her love of writing and travel. She has two adult children and lives near Maitland, New South Wales.
Website https://nomadauthors.com/JanSelbourne
Twitter https://twitter.com/JanSelbourne
Facebook https://www.facebook.com/jan.selbourne
Goodreads https://www.goodreads.com/author/show/14661584.Jan_Selbourne
Amazon Author Page https://www.amazon.com/Jan-Selbourne/e/B0184OSZ6E
Get to know Jan Selbourne better by signing up for an email newsletter https://landing.mailerlite.com/webforms/landing/h8t2y6