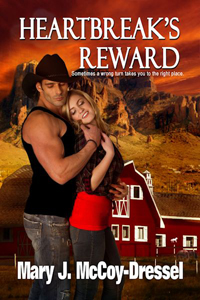 Mary J. McCoy-Dressel found her niche when she began writing
in the contemporary western romance genre. More books are on the horizon. She
dabbles in the paranormal genre and has written two time-travel romance novels,
which are now out of print.
She lives in Michigan, U.S.A., and is a mom to two sons and
a new daughter-in-law. Her career was in education working with children with
learning disabilities and Title One programs—at the elementary and middle
school levels. She’s taught creative writing for a college leisure program.
Besides writing, Mary enjoys photography, reading, going to
the opera, having dinner with friends, and traveling. Her dream came true when
she retired and became a full-time writer. Her Double Feature today highlights
two books from the Double Dutch Ranch Series: Love at First Sight.

Genre Contemporary western romance
Book heat level (based on movie ratings): R
Rancher Jase
Carlson doesn’t understand the ache in the hollow of his chest, since his
ex-wife ripped his heart out. She doesn’t follow the court rules where
his children are concerned, which makes him even more pissed off. Harboring a
bad attitude, he wishes he wasn’t a gentleman when he comes to the aid of a
quick-tempered, sexy blonde. He can’t allow her tight jeans and sweet smile to
sway him, even after he’s coerced into spending time alone with her.
Fighting the torturous battle going on within his own mind and body, he can
either deal with it—or succumb to the woman who appears to be everything he
didn’t know he needed.
In an attempt to
save her rebellious teen sister from herself—as her guardian, Brenna Page
leaves everything behind and moves to Canyon Junction, Arizona. When she
unexpectedly meets a hot-headed cowboy with intense blue eyes and muscles to
die for, the first thing she wants to do is get away. Since she can’t seem to shake
him, Brenna wonders if that same grudge-filled cowboy with an attitude is
someone worth taking on. But still dealing with painful memories, and a sister
who wants nothing to do with Arizona, the last thing she needs right now is a
horse ranching cowboy interfering.
One wrong turn.
Two broken families. Brought together by chance and need.

About Of the Cowboy’s Own Accord, #3 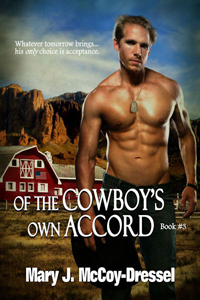 Army Ranger Dane Carlson never means to fall in love before
leaving for another tour of duty, but unexpectedly, he does. While deployed, he
finds himself being sent home early to the family ranch to make a heartrending
decision. Little does he know he isn’t the only one making decisions. His first
priority is to rekindle the flame after losing communication with Gracelyn
Clark. The woman who owns his heart and has since the moment their gaze
connects. But, now nothing is the same as when they met.
The first round of news is surprise enough, yet Gracelyn
continues to release shocking information detrimental to their future. Can they
make it work after so few days together seven months ago? Adjusting to many new
things in his life isn’t easy as it is, so to pull himself back to the man he’s
become could be the biggest test of all—in order to protect his own.
Challenges abound even as Dane and Gracelyn come to terms
with the decisions they’ve made. Whatever tomorrow brings, their only choice is
acceptance—to take one day at a time and face life as it comes.

Buy Of the Cowboy’s Own Accord