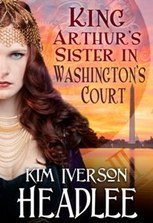 Kim Headlee lives on a farm in the mountains of southwestern Virginia with her family, cats, fish, goats, Great Pyrenees goat guards, and assorted wildlife. People and creatures come and go, but the cave and the 250-year-old house ruins—the latter having been occupied as recently as the mid-twentieth century—seem to be sticking around for a while yet. She has been an award-winning published novelist since 1999 (Dawnflight, first edition, Simon & Schuster) and has been studying the Arthurian legends for nigh on half a century.

Welcome to Romance Lives Forever! We’re happy to have you here today.
Name: Morgan
Age: Sixteen hundred and eight in the latter years of your century. In my rightful century, my age is none of your concern.
Gender: Female
Birthplace: Tintagel Castle
Profession: Queen of Gore
Ethnicity/Species (if not human): I am human. That is all that should matter to you mad people.
Describe your body and build, skin tone, height and weight. Include any unique features such as dimples, freckles, or scars.
My glorious silken hair is auburn. Anyone who calls it “red,” like that of the coarse, unruly mane sported by my dead husband, King Uriens, shall join our dungeon’s denizen who made that same mistake. Provoke me to exceptional anger, and I shall arrange faux funerals of your kin for you to watch from your window slit too.
All my other features are kept perfect by cause of my magic… or cosmetics, to which my assistant Clarice introduced me in your century. Using cosmetics in lieu of magic I have found to be ever so much more efficient in terms of energy expended, allowing me to focus my magic on far more important pursuits, such as causing the peerless Malory Beckham Hinton to become President for Life (she vetoed my idea to make her Queen of America, though I know for a certain fact that she would be quite good at it).
Who is the significant other in your life?
In my ancient life, the man I loved best was Sir Accolon, the comeliest of men and manliest of lovers. In the latter twenty-first century, Sandy Carter—who could be my dead lover’s twin—owns my heart, and I his. Sandy surpasses my dead lover in all respects, bedchamber prowess most especially, by a hundred fold.
Please tell us a little about yourself.
My name, Morgan, was chosen by my mother, Duchess Igraine, to honor the Great Queen of the Old Religion, Mór Rigan, goddess of war. My mother never knew how prophetic her choice would prove to be.
I am the daughter of Duke Gorlois, the sister of Queen Margawse and Queen Elaine, the wife of King Uriens of Gore, and the mother of Sir Uwaine of the Table Round. Blessed good fortune made me all of these things.
By the capricious hand of ill fortune, King Arthur became my younger half brother, spawned upon my most virtuous and blameless mother by that demon in man’s raiment, Uther Pendragon.
I despised Arthur from the very hour of his birth.
What is your viewpoint on wealth?
I love it, of course, and the more, the better. It can be quite the burden, but it does convey its own brand of magic too.
On what special skills do you rely?
Have you not heard of Morgan the Wise, healer and sorceress extraordinaire? What is the name of the rock under which you have been living?
What kinds of things do you always carry (in pockets or purse)?
I am never without my circlet, for I find it useful in your lunatic century to remain mindful of my true nature. Well… almost never. You shall have to read my chronicle to discover what caused me to become bereft of that symbol of royalty, which had to do with the other item I keep concealed upon my person for emergencies and which I am fully capable of wielding to deadly advantage: a dirk.
Do you have children?
My only son, Sir Uwaine, lies dead and gone these past fifteen centuries. But a mother never forgets the tautness of that eternal bond, I assure you.
Do you care about what others assume about you?
La, what a question! I am a queen. Of course I do not give a single overripe fig for what the masses think of me; I do not require their approval, only their obedience. That said, however, there is one man whose approval I have sought more and more often of late: my lover, Sandy. He has been known to influence my decisions even when he is not present. I find that most disconcerting… and yet not at all unpleasant.
If someone from your past showed up, who would you most want it to be, and why?
When Sandy reunited with his lost and presumed-dead sister, I discovered that I craved to see my long-dead brother, King Arthur, that I might set things aright between us. That wish looks unlikely to be fulfilled, alas, though I do remain hopeful that it shall come to pass one day.
What inner doubt causes you the most difficulty?
I never had experienced such a calamity of the arts as when my time-travel enchantment failed by three hundred miles and two hundred years. Since I know not how the spell went awry, I confess I have been afraid to assay it again, lest it leave me forever lost in time.
What are your biggest hopes and dreams?
Although I have experienced marvelous adventures in your shiny new century, and Sandy has become more dear to me than any other man I have ever known, I do hope I can one day return to my rightful era. I have made quite a fine place for myself as owner of the London Knights world championship baseball team, but I do not belong here. Sandy, naturally, wishes for me to stay,—but he is man enough to bow to my wishes in this sensitive matter. He is, was, and always will be such a daisy.