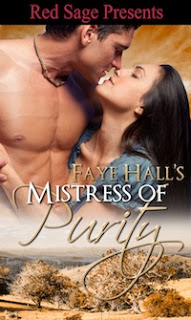 Faye Hall author of Mistress of Purity answers five easy questions
to help readers get to know her better.

Faye Hall’s passion driven, mystery
filled books are set in small townships of North Queensland, Australia during
the late 1800’s.
Each of
her novels bring something symbolically Australian to her readers, from
Aboriginal herbal remedies, to certain gemstones naturally only found in this
part of the world.
Each of
her books tell of a passionate connection between the hero and heroine,
surrounded and threatened by deceit, scandal, theft and sometimes even murder.
These romances swerve from the traditional romances
as Faye aims to give her readers so much more intrigue, whilst also revealing
the hidden histories of rural townships of North Queensland.
Faye
finds her inspiration from the histories of not only the township she grew up
in, but the many surrounding it. She also bases most of her characters on
people she has met in her life.
Faye
was able to live her own passion driven romance, marrying the love of her life
after a whirlwind romance in 2013. Together they are raising their 9 children
in a remote country town in northern Queensland, Australia.
What’s your favorite down-home family style meal?
Gravy smothered pork with creamy
mash potato
Describe the perfect vacation.
There is a place called Whitsunday Sand’s in Bowen near
where I live in North Queensland that is just beautiful.  It’s a resort nestled in the rocks between
two of the most beautiful beaches in the whole of Australia.
Tell us about your
favorite toy as a child.
I loved to color in, though I did tend to color in my dolls
too bt like I was giving them tattoos.
What kinds of things do
you read when you’re researching a new book?
Michael Cannon books are always helpful, as too are books
from our own Bush Tucker Man Les Hiddens.
But I tend to rely a lot on word of mouth history too, especially from
my father and stories from his family.

Prue had seen something the night her father was murdered –
something that would forever change her life…
…She had seen something that would continue to haunt her and
follow her wherever she went.
When she had married the Earl of Malloy, Prue had hoped to
be able to hide under his name and at his out of town estate.
What she had not thought was to become his son’s MISTRESS OF
PURITY.
Gareth had sworn never to return to his father’s estate, not
to the life he had once thought to have there.
He had hoped that the man he had grown in to was no longer
hoping to find the love of a woman he knew could not possibly exist.
What Gareth had not wanted was to find his comfort in the
arms of his father’s young wife…a woman he knew was hiding far more than just
one secret from him.