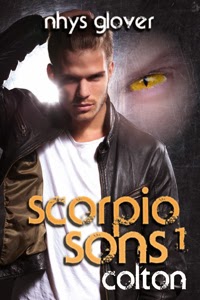 The character interview allows a hero or heroine to tell
readers about himself or herself. Today’s interview is with Colton Blake from Scorpio
Sons 1: Colton.

After a lifetime of teaching others to appreciate the written
word, Aussie author Nhys Glover finally decided to make the most of the Indie Book
Revolution to get her own written word out to the world. Now, with over 100,000
of her ebooks downloaded internationally and a winner of 2013 SFR Galaxy Award for
‘The Titan Drowns’, Nhys finds her words, too, are being appreciated.
Living in the beautiful Yorkshire Dales of England, Nhys these
days spends most of her time “living the dream” by looking out over the
moors from her window as she writes the kind of novels she loves to read. The ones
that are a little bit steamy, a little bit different, and wholly romantic.
What was your biggest challenge in writing this book?
Coming up with distinctly different characters for all the Sons,
who are basically all the same person. I did a lot of reading about identical twins,
because that’s what clones are. Then I drew up an astrological natal chart for the
Sons’ ‘birth’ and started assigning qualities to each from that chart. Yes, I used
to be a professional astrologer. It taught me a lot about people.
Why did you choose this character for the interview today?
Colt is wonderfully intense and complex. A real Heathcliff. I
love deep and moody. And as he’s the first of the Sons to find his mate, his was
the steepest learning curve.
When writing the book, what did you discover about this character
that surprised you?
My characters are always surprising me. I’m more reporter than
novelist. I just follow along behind my people, recording what goes on, and not
knowing what will happen in the end until I get there. So, Colt was no exception.
He handled putting Lyss in danger a lot better than I expected. He’s like Alyssa
in that way; doesn’t see how amazing he really is. But he proved it to me.
Are any sequels planned for this book?
There already are six in the series. The seventh is on pre-release
and will be available on the 20 May.

Title Scorpio Sons 1: Colton
Genre SF/Shifter Romance
Author Nhys Glover
Book heat level (based on movie ratings): R
Staring into glowing cat-eyes, while her attackers lay like broken
dolls in the snow around her, shouldn’t have been a turn-on. But it was. She shouldn’t
consider the man who killed to save her from her rapists a hero. But she does. She
shouldn’t feel as if she belongs to that hero, mind body and soul, but there’s no
way she can deny it. And the hardest part for Alyssa Aimes to get her head around,
besides his extraordinary eyes: the knowledge that she’ll never see him again.
But four years later, Colton Blake does come back into her life,
just as dramatically as he left it. And this time she’s determined to keep him there,
even if she has to risk her recording contract and her life to do it.
For Colt, much has changed in four years. No longer a homeless
drifter with a dangerous secret, he has found his place among the Scorpio Sons,
an elite band of genetically engineered cloned warriors charged with bringing to
justice a secret cabal that has been exploiting the world for millennia. But one
thing that hasn’t changed during that time: his obsession with Alyssa, the stranger
he met just once and can’t seem to forget. But now his mission has brought Alyssa
back into his life. And with her comes a secret she doesn’t even realize she harbors;
a secret that could bring not only Colt to his knees, but the whole band of the
Scorpio Sons along with him.