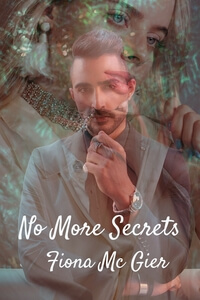 Posing as a tutor in a rich household in Colombia is the cover for agent Tomás Escobedo to search for evidence to convict the dangerous drug lord who lives next door, in No More Secrets, a romantic suspense novel by Fiona McGier. But when the lead actress in the indie crew filming a movie there tells him she doesn’t believe that he’s a tutor–that he’s just acting like one–he fears his cover will be blown by the beautiful blonde and endanger both of them.

Let’s meet Tomás Escobedo from No More Secrets, a romantic suspense, by Fiona McGier. Welcome to Romance Lives Forever. I’m Kayelle Allen, author and owner of this blog. Happy to have you here! Please tell us about your latest book.

No More Secrets by Fiona McGier

Kelly, Raul, and Jared are making another movie together–this time in Colombia. Tomás is there, posing as a tutor, while trying to find the evidence to bust the drug lord who owns the mansion next door to the one they’re filming in. Kelly can’t figure out why his vibe doesn’t say tutor to her–until she figures out his secret. And he has no idea why she’s so quick to figure him out, until he learns about her ex-CIA mom, and ex-KGB step-father. They can’t fight their growing attraction to each other. Will it get them both killed? Or can they find their way to a happily-ever-after, once they have no more secrets from each other?

He’s tall, over 6′, with dark brown hair that usually has a blond streak in the front. He has a gold hoop earring in his left ear. His eyes are very dark brown. He looks like a man who works out a lot, because he does. His body is a weapon that’s kept him alive for years.

Kelly Ann Sheridan, daughter of the heroine in Her Last Resort, book 3 in the Minnesota Romances series. She’s a blonde actress who first met her co-star, Raul Roderick, and their director, Jared Sorrenson, in the first book, For the Love of His Life. She’s vivacious and much more intelligent than most people think she is– she looks like Malibu Barbie, with a permanent tan, but has alert blue eyes.

There will be food and drink, and dancing–lots of dancing. Tomás likes nothing more than to get a female out on the dance-floor to show off his moves. Unfortunately, Kelly has no sense of rhythm. Even though this can throw off his style, he doesn’t care. He’ll be dancing with her until he has to drag her away so they can be alone.

How does the hero feel about being at this particular party, and what body language is he displaying that gives it away?

He’s spent many years perfecting his control over his body language, so you never know if his casual relaxed attitude is real, or just what he wants you to see. But if his woman is there and there’s dancing, he’ll be holding her closely, and he might let his guard slip and stop paying active attention to others around him. But he still will be alert to any signals that there is something going down.

He always studies a place out of habit, checking for exits and possible dangers. He mingles when he’s really relaxed. Otherwise, he acts casual while observing everyone and everything closely.

He enjoys Mexican beer, when it matches the food. He also enjoys shots of expensive tequila. But he never drinks to excess, since he’s spent too many years being cautious.

Since he’s a tall, muscular man, he can drink more than others and still maintain his control over himself.

He doesn’t hide–he faces danger head-on. He might drag Kelly off into a secret place so he can grope her, without an audience.

When he’s being himself, relaxed, he will stay with the people he trusts. When he’s in public with Kelly, he’s always at her side, to protect her from her public–some of whom get grabby sometimes. One look from him is usually enough to stop that.

He will end it. And the person who started the fight won’t be happy about how he does it.

He does the tossing. He’s always in control of himself, so he never gets tossed out.

He doesn’t stay long in public with Kelly, because he always wants to get her alone.

He will show them his IDs and explain who he works for. If he’s undercover, he’ll defend himself, using as little force as possible.

He runs to check on it. He runs toward danger–it’s his job.

He assesses the threat and devises a plan to end the violence as quickly as possible, while attracting a minimum of attention.

He acts on his plan and stops the assault.

This has never happened to Tomás. His training has always saved him.

He’s polite but coldly terse. And he’ll excuse himself as soon as possible.

He wouldn’t hesitate to take over and ensure that the outcome is favorable for himself, as well as any innocents involved. He’ll deal with hurt feelings once the danger has passed.

That he will get out of this, as he has so many other situations that seemed hopeless. He’s got a good track record of getting out of tight spots, so he’s confident.

No one thing special, but he’s got a lot of respect for his handler, Malcolm, who has never steered him wrong.

He’s always been able to get himself out of tight spots, so no matter how tough things get, he’s supremely confident that he can escape–especially now that he has Kelly to return to.

He was introduced to readers as a young agent in Undercover Lovers. He thought he was in love with the heroine, Ameena. But he was too young to understand that he was just jealous because she chose his older partner over him. Since that hadn’t ever happpened to him before, he took it badly. He used to be open to assignations with any combination of females and males–he enjoyed sensuality in many forms. But now that he’s older, he’s ready to settle down. He just didn’t realize it until he met Kelly.

Where to buy No More Secrets

I sub in high schools during the school year. Otherwise I’m writing and blogging about my books–and reading and writing reviews. Not only do I write erotic romance, I love to read it too. I often read while camping with my long-time HEA. Our four adult kids sometimes join us. I also enjoy sewing–mostly masks these days– crocheting afghans to keep my loved ones warm, and baking–cookies, muffins, and especially pies. I’m known for my never-fail pie crust, so I put the recipe on my website under the pies tab, along with some of my family’s favorites, that I featured in one of my books that had a heroine who baked lots of pies.
Website www.fionamcgier.com
Blog www.fionamcgier.com
Smashwords: https://www.smashwords.com/profile/view/fionamcgier
Facebook https://www.facebook.com/fiona.mcgier/
Goodreads https://www.goodreads.com/author/show/2987252.Fiona_McGier
BookBub https://www.bookbub.com/profile/fiona-mcgier-27d35716-8cc6-4638-8470-03331056b1d7
Amazon Author Page https://www.amazon.com/Fiona-McGier/e/B003J8QJGE
All author: https://allauthor.com/profile/fionamcgier/
Authors Den–https://www.authorsden.com/visit/author.asp?authorid=122551
Get to know Fiona McGier better by signing up for email updates on her blog.