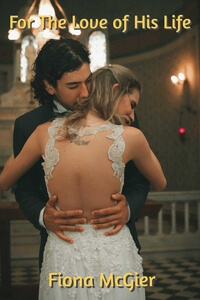 An action movie star has to face his demons when he’s chosen to star in an indie movie in For the Love of His Life, a contemporary romance by Fiona McGier. The director’s cousin is assigned to teach him how to portray an outdoorsman, but ends up teaching him what’s important in life, also.

Fiona, welcome to Romance Lives Forever. I’m Kayelle Allen, author and owner of this blog. Happy to have you here! We’re excited to find out more about your hero, but first, tell us about For the Love of His Life.

For the Love of His Life by Fiona McGier

When a famous action movie star known for indulging in his addictions to excess, needs to clean-up for a major role that even he doubts he can deliver, the indie director sends him up to a resort owned by his grandmother in the Boundary Waters Canoe Area of upper Minnesota, to learn to commune with nature. His guide is Veronica, the director’s cousin, a tall, athletic woman who has the relaxed, sensible nature of someone who has the self-confidence that comes from having family around to love and support her. Raul’s initial clumsy attempt to seduce her makes her laugh–so he calls her fat. Is there any hope for a relationship after that rocky start? Can Raul overcome his hard-partying nature to discover what is really important in life? And will Veronica ever believe him, when he “lies for a living?”

Know the Hero from For the Love of His Life

Note that Raul has two personnas–the one before he realizes what an empty life he’s been leading, and the one after he falls in love for the first time ever. So if it’s pre-Veronica Raul, he’ll call his dealers to find out where the latest party is–they’ll bring the blow, he’ll get his pick of celebrity whores, and a good time will be had by all.

If it’s the Raul who is in love with Veronica, he’ll choose to spend every minute he can with her–or in the outdoors, enjoying fishing, running, and hiking in the woods.

Old Raul would rather do snort cocaine and drink to excess than eat.

Old Raul wears anything off the floor that passes the “sniff” test.

New Raul cares about what he looks like, to please Veronica.

New Raul–as long as it involves something he’s learned from Veronica, he can do it–like fixing fishing lures, poles, and canoes/oars.

Old Raul tried to kiss Veronica when he first met her. He assumed she’d be thrilled to be kissed, maybe screwed, by a celebrity like him. She dodges his kiss and his face hits the wall. He tells her he thought that’s why she brought him outside-away from her beloved grandmother, who he then insults. She slaps his face for insulting her grandma. He retaliates by calling her fat and plain. She laughs, then tells him what she really thinks about him–about all of the venereal diseases she’s sure he must have from being such a man-whore, and how he’s smart to hold off on doing porn until his looks fade, which they will soon, at the rate he’s destroying himself with drugs and alcohol. He’s vaguely insulted.

Old Raul would ignore them.

New Raul can’t wait to have a family of his own to belong to, so he’d study them.

New Raul can’t wait to get out into the sunshine to enjoy a new day.

Old Raul doesn’t play with his phone. He only uses it to find his dealers and where the next party is.

New Raul uses it only to keep in touch with Veronica.

Old Raul is clean-shaven, to keep his movie-star image bright.

New Raul likes to look scruffy, since Veronica likes him that way.

Both Rauls have unadorned skin–less to hide during his frequent nude scenes in the crappy rom-coms and action movies he’s usually cast in.

Old Raul needs a driver, because he’s frequently too buzzed to drive.

New Raul is a careful driver.

Where to buy For the Love of His Life

I sub in high schools during the school year. Otherwise I’m writing and blogging about my books–and reading and writing reviews. Not only do I write erotic romance, I love to read it too. I often read while camping with my long-time HEA. Our four adult kids sometimes join us. I also enjoy sewing–mostly masks these days– crocheting afghans to keep my loved ones warm, and baking–cookies, muffins, and especially pies. I’m known for my never-fail pie crust, so I put the recipe on my website under the pies tab, along with some of my family’s favorites, that I featured in one of my books that had a heroine who baked lots of pies.
Website www.fionamcgier.com
Blog www.fionamcgier.com
Smashwords: https://www.smashwords.com/profile/view/fionamcgier
Facebook https://www.facebook.com/fiona.mcgier/
Goodreads https://www.goodreads.com/author/show/2987252.Fiona_McGier
BookBub https://www.bookbub.com/profile/fiona-mcgier-27d35716-8cc6-4638-8470-03331056b1d7
Amazon Author Page https://www.amazon.com/Fiona-McGier/e/B003J8QJGE
All author: https://allauthor.com/profile/fionamcgier/
Authors Den–https://www.authorsden.com/visit/author.asp?authorid=122551
Get to know Fiona McGier better by signing up for email updates on her blog.