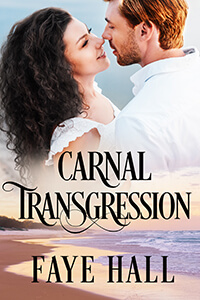 Would you break the law to protect the woman you love from a killer? Is the Question Faye Hall asks in Carnal Transgression

Let’s meet Seamus Tynedale from Carnal Transgression, a Historical Romance, by Faye Hall. Welcome to Romance Lives Forever. I’m Kayelle Allen, author and owner of this blog. Happy to have you here! Please tell us about your latest book.

Would you break the law to protect the woman you love from a killer?

Constance Dunbar is desperate to discover who killed her sister. Her plea for help is ignored by the local police, so she advertises for a private investigator. Seamus Tynedale answers the ad, and she immediately recognizes him as the friendly stranger whose arms held her so tenderly as she wept after her sister’s death.

Seamus longed to be reunited with the dark-haired beauty who’d kissed him in the churchyard. When he ends up working for her as a private investigator, he knows that his position as a police constable needs to remain a secret due to her mistrust of the department.

As Seamus hunts for the murderer, he finds himself lured into a den of secrets and lies tracing back eighteen years to Ireland, and it all seems to be connected to Constance. Seamus delves into Constance’s past, hoping to understand the secrets she’s so intent on keeping hidden. What he finds is a passion that ignites his heart and captivates his senses.

When Constance’s life comes under threat, Seamus has to choose between following the law and protecting the woman he loves from a killer. Will he be able to safeguard Constance, or will he lose her to the evil that seems to have followed her to Australia? 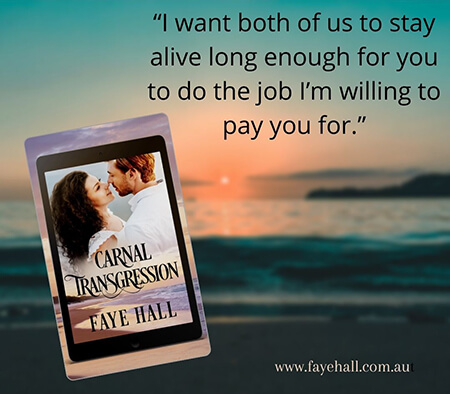 A dark haired beauty with an hourglass figure named Constance.

It would be very quiet and traditional. Perhaps just a few friends sharing some Irish whiskey whilst reminiscing about their hometown and the friends they’d lost.

Seamus would be very uncomfortable as he’s distanced himself from people for so long.

Only a small glass or two. Not a heavy drinker at all.

Probably to hide, but if Constance has also left the party then he’d follow her just to sneak some time alone.

He’d stay by Constance’s side.

He would try to break it up, but would only throw punches if Constance was in danger.

Despite his small stature, he can handle himself quite well so he’d be doing the tossing in an attempt to keep the peace.

He’d be one of the first to leave.

He is a police officer so provided it’s not his senior Constable pulling him aside, he would be fine.

It would trigger his protective instinct and he’d run to see if he could help.

To risk life and limb to save them.

He’s not much of a fighter, but he’d swing enough punches until the aggressor was distracted.

He fights until the victim has found there way to safety no matter the cost.

He’s very aloof and short in his respnses and leaves as soon as he’s able.

Seamus would try to give advice and steer them in the right direction.

He’d remind himself of his duty and the price so many of his kinsmen had paid for his freedom.

He’s quoted in the book as telling one character to “remember the brave man you once were.”

Seamus has lost his family and he is constantly reminded of the sacrifice they made so he could start a new life in Australia.

Seamus is loosely based on my Great Grandfather who was a policeman both in Ireland and when he migrated to Australia during the same time Carnal Transgression is set.

Where to buy Carnal Transgression

Faye Hall spent her early years listening to stories about the families – including her own – who settled townships in and around her hometown in North Queensland, Australia. The local townspeople, including her own parents, told her stories of corruption and slavery, along with family secrets and forbidden love.
Desperate to remember what she’d been told, along with her already growing love of writing, Faye began to write about the history of her local area. Never could she have imagined the history of her small home town in Australia would become a growing list of published books.
Faye’s passionate stories combine controversial subjects and provocative encounters as her characters struggle to survive the lifestyle in early rural townships throughout Australia. She explores slavery and abortion, drug addiction and murder, as well as forbidden love and passionate affairs of the heart.
When she’d not writing, Faye enjoys sharing a bottle of wine with her husband in their ever-growing garden, and encouraging the varied interests of their combined family of nine children.
Explore the world of Faye Hall, Australian Historical Romance Author at her website https://www.faye-hall.com
Website https://www.faye-hall.com
Twitter https://twitter.com/FayeHall79
Facebook https://www.facebook.com/pages/Faye-Hall/174774709247649
Pinterest https://www.pinterest.com/fayehall79/
Goodreads http://www.goodreads.com/author/show/6882637.Faye_Hall
Amazon Author Page http://www.amazon.com/-/e/B00DPIMSMW