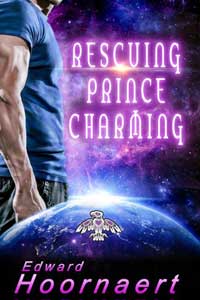 Today’s featured book is Rescuing Prince Charming by Edward Hoornaert. Tell us about your story. We’ll have other questions in a moment.
Dusty Johnson, a self-styled ordinary, everyday woman, responds with extraordinary heroism when saboteurs try to bomb the prototype of Earth’s first starship. She wants to return to anonymity, but that burst of courage propels her ever deeper into dangers that tear the scabs off her dark past — and thrust her into the arms of the unattainable man of her dreams.
Reese Eaglesbrood, an alien prince, yearns to restore his tattered reputation by guiding the starship project to completion, but his fascination with the unassuming heroine threatens to undermine his fragile authority. Shunning Dusty is necessary, yet unthinkable — and when the saboteurs strike again, she may be his only ally against Earth’s most elusive enemies.
What species/races of people are in your book?…
The main characters are all human — Native Americans from the future. The villains are shapeshifters from the ‘nothingness’ In Between alternate realities.
Do you have non-sentient creatures or animals in your story? If so, what are they?
A Siamese cat plays an important part.

What languages are spoken in your story universe?…
English and Shanoog
If you created a language for the story, what is it called?…
Shanoog, based on the Chinook trade jargon used by Pacific Northwest Native Americans but intermixed with French and Spanish
Please give us a few words in this language and their translation.…
klootch – an impolite but not obscene word for a woman: roughly “broad” or “chick.”
kwayviva – literally ‘cave for living’; one of the underground cities the Kwadrans lived in before hopping to our Earth.
siatko – a legendary demon who visited unfortunates in the night. By extension, the name given to the enemy shapeshifters.
In the culture of your story world, what is different from ours?…
Kwadra Island has landed on near-future Earth. It’s a duplicate of Vancouver Island, but inhabited by the descendants of the Kwakiutl tribe of Native Americans. On an alternative Earth that diverged from ours around 1800, they ruled the Pacific Northwest until the planet’s environment collapsed. Using 23rd century technology (they’re from the future) they ‘hopped’ their entire nation to our Earth, though the machinery cost all their resources. However, the impoverished kingdom possesses schematics for the most advanced technology on Earth.
What rights (such as equality) are challenges for your characters?…
Racial prejudice against the First Nations people from the future.

Describe one of the worlds where your story takes place.…
Most of the story happens underground in an abandoned kwayviva that now houses a top secret research and development facility designed to build a starship using plans and specifications from Kwadran databases.
What makes this world unique?…
Kwadra’s presence has upset the world’s status quo, including religions (which didn’t foretell Kwadra’s coming), race relations (because the most advanced nation is now Native American) and the balance of power. The new route to power is to ‘romance’ Kwadra into sharing some of its advanced technology.
Other books in the series highlight various aspects of Kwadra’s arrival, but this one focuses on a joint Kwadran-North American project to build a starship.
Tell us about the age of the culture in your story, i.e., are the people part of an ancient civilization, a newly formed group within an established culture, pioneer colonists, etc.…
Dusty, the heroine, is a contemporary American technical writer from Tucson. She’s one-fourth Mexican, is extremely intelligent, and has an engineering degree.
Kwadra is based upon the historical Kwakiutl tribe that I became fascinated with after teaching at a one-room school on an island off the British Columbia coast. But they aren’t our world’s Kwakiutl; no totem poles, for example. Instead, it’s an extrapolation of what might have been if the tribe was heavily influenced by France, Spain, and China, yet managed a tenuous autonomy until escaping to our Earth.
What food or drink is available to your characters?
The usual food of our times.
In what ways was it helpful to have a map (or sketch of one) for your story?
The map of North America’s west coast has changed dramatically. A map of the future is attached. 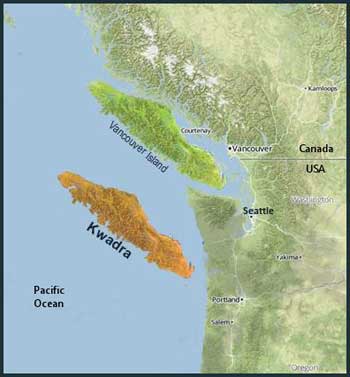 What are the physical characteristics of the race/species of your main characters?…
They’re both human. Dusty inherited black hair from her Mexican grandmother, but doesn’t otherwise look Hispanic; since people can’t tell, she enjoys surprising them with the fluent Spanish Abuela Estrella taught her. Reese looks like an aboriginal American, but mixed with Asian and European ancestry.
What physical differences exist in the way your characters communicate (i.e., telepathy, empathic abilities, etc.) with each other?…
Many Kwadrans have implants that include personal assistant/computers and thought-operated radios.

Please give us three tips you find helpful when creating a story world:…
Write what you know (or enjoy) – and then research like crazy to know more.
Know all aspects of your world (economy, history, power structure, family mores, etc) even if they aren’t central to the story. Much of this will end up being important in some way to the backstory and/or the feel of the culture.
Don’t fake it! Research it!
When you researched for your story setting, what kinds of things did you learn?…
My alien shapeshifters are from In Between alternate realities. The quantum-mechanical hypothesis of parallel universes is “universes that are separated from each other by a single quantum event” . . . but researching “single quantum event” leads to utterly unhelpful phrases such as “the subjective appearance of wavefunction collapse is explained by the mechanism of quantum decoherence.” So although I learned more than I could ever understand about quantum theory, I ended up with artistic license to design my own In Beetween.
What things should writers avoid when building a science fiction world?…
Be original; avoid taking a quick and easy well-traveled path. A few years ago, fictional worlds inhabited by heroic, superhuman vampires were all the rage, until suddenly they weren’t. Now, it seems that heroic, superhuman shapeshifters are everywhere. If you must use a tried-and-true element, be sure to give it such a strong twist that you own the idea.
Share a resource you found helpful when researching for your story.…
It’ll be of no use to anyone else, but Language of Oregon, by George Gibbs, published 1863, was essential in developing my aliens’ language, Shanoog.
What’s your advice for writers who want to create a solid background for their story world?…
Be thorough. Be original. Imagine more about your world than you ever think you’ll need

What kind of guy writes romance? A guy who married his high school sweetheart a week after graduation and still lives the HEA decades later. A guy who’s a certifiable Harlequin hero—he inspired Vicki Lewis Thompson’s Rita Award finalist Mr. Valentine, which is dedicated to him.
Ed started out writing contemporary romances for Silhouette Books, but these days he concentrates on science fiction romance. He’s been a teacher, principal, technical writer, salesman, janitor, and symphonic oboist. He and wife Judi live in Tucson, Arizona. They have three sons, a daughter, a mutt, and the galaxy’s most adorable grandsons. Visit him at http://eahoornaert.com
Website / Blog https://eahoornaert.com
Twitter https://twitter.com/edhoornaert
Goodreads https://www.goodreads.com/author/show/1237266.Edward_Hoornaert
Amazon Author Page https://www.amazon.com/Edward-Hoornaert/e/B001K8HWVQ/
Newsletter http://eepurl.com/Psqmn