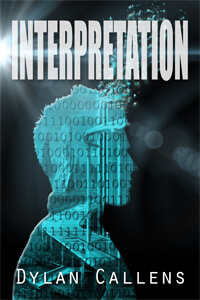 Today’s featured book is Interpretation by Dylan Callens. Tell us about your story. We’ll have other questions in a moment.

Carl Winston’s life is perfect under the care of an artificial intelligence. Except that he doesn’t know this entity exists.
Carl floats through his luxurious life with his son, Liam, at his side. Together, they play holographic video games, eat Brave New Burgers, and watch violent Untruthers fight each other in a blood-sport.
Suddenly, pain rips through Carl’s head until he blacks out. Awakening in an institution called Bedlam, he must now piece his life back together. Is his new world filled with delusions or is a greater truth being uncovered?
Interpretation will leave you breathless as you discover the horrific possibility of such an Orwellian future.
What species/races of people are in your book?
There are humans and artificial intelligences. In the book, I would say that these machines do count as a species.
Do you have non-sentient creatures or animals in your story? If so, what are they?
I would argue that most of the people living in the world of illusion setup by the artificial intelligence are non-sentient. I mean, they are able to perceive things, but none of those things are real.

What languages are spoken in your story universe?
That’s kind of difficult to answer. I have used English in the story, for obvious reasons, but the machines clearly wouldn’t speak to each other in English. There are small sections written in hexadecimal, but machines wouldn’t communicate that way either. I used hex to show a bridge between a machine language and human communication. I don’t think it’s an accurate representation of how machines communicate but I wanted to show, in some way, how people were responsible for the rise of this entity.
In the culture of your story world, what is different from ours?
The biggest difference is that the world is falling apart, but we have been implanted with a device that lets us sense the world differently. All of our sensory data is false. While people believe that they are living in a luxurious world, the truth is far different.
What special laws are important to your story world?
All laws are important, but it’s actually impossible for the laws to be broken without the machines letting it happen. There is the possibility that the implant will fail, in which case, characters are immediately sent to a detainment facility.
What rights (such as equality) are challenges for your characters?
There are two characters that are released from the artificial intelligence’s control. They learn that all of their rights have been violated. Trying to come to terms with having these rights violated is an important challenge for them.

Describe one of the worlds where your story takes place.
Interestingly, every place in the novel has two different settings. The one that most people see is futuristic, luxurious, and oddly happy. The reality, however, is that they are nearing starvation, everything is dilapidated, and the world is bleak.
What makes this world unique?
The world is unique because machines are constantly running psychological experiments, which is how humans ended up in this state. It was a quiet revolution, so no one is even aware that these machines exist.
Tell us about the age of the culture in your story, i.e., are the people part of an ancient civilization, a newly formed group within an established culture, pioneer colonists, etc.
The people are essentially living out an experiment. Given the timeline of the story, though, I think it’s just cruel to keep people living like that, since whatever data the machines wanted to gather from the experiment would have been completed.
What food or drink is available to your characters?
They only eat tofu and drink brown water. Mind you, they think that they are having burgers and soda, or whatever food they desire, so it’s not all that bad. Unless you are into truth.

What are the physical characteristics of the race/species of your main characters?
People are severely emaciated. They are filthy and unkempt. It’s a disgusting world.
What physical differences exist in the way your characters communicate (i.e., telepathy, empathic abilities, etc.) with each other?
Everything is done with a very creepy smile on their faces. I’m not sure why I added that to the story, but I’m glad that I did.
What differences, if any, exist in the way your characters reproduce?
People are not responsible for their own reproduction in the story. In fact, I would argue that they are asexual – at least while under the care of the AI. Instead, people are factory-made. Although this factory is significantly different than the one in Brave New World, there was some inspiration there.

Please give us three tips you find helpful when creating a story world:
I’m not sure that I have any real tips. All I did was keep refining the story and setting until I was happy with it. When the idea for the story hit me, I had a pretty good idea about what the world would look like.
When you researched for your story setting, what kinds of things did you learn?
I didn’t need to do much research for the setting. I did, however, re-read parts of The Road to get inspired for the bleak walk that the main characters make. I was more concerned about researching the bits of psychology that I wanted to introduce.
What’s your advice for writers who want to create a solid background for their story world?
Take the time to refine ideas. Ask other people what they think. What seems like a good idea to a writer isn’t always a good idea to other people. Not that I would bend to the whims of one or two people, but if the majority of people don’t like it, then something is clearly wrong.

Dylan Callens lands cleanly. That would be the headline of a newspaper built with an anagram generator. And although Dylan is a Welsh name meaning god or hero of the sea, he is not particularly fond of large bodies of water. His last name, Callens, might be Gaelic. If it is, his last name means rock. Rocks sink in the sea. Interestingly, he is neither Welsh nor Gaelic, but rather, French and German. The inherent contradictions and internal conflict in his life are obvious.