Where Have All The Scoundrels Gone? By Donna Cummings @BookEmDonna #RLFblog #Regency 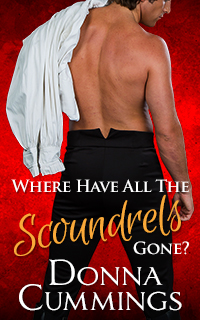 Today’s featured book is Where Have All The Scoundrels Gone? a Regency by Donna Cummings.

Where Have All the Scoundrels Gone?

That is precisely what the Dowager Lady Thornham wants to know. She devotes her days to reading every scandalous morsel published about London’s rakes and rogues, but lately it seems they have all settled down and abandoned their wicked behavior.

Fortunately the Dowager has hit upon a new diversion: matchmaking. She has summoned her three nephews to a house party attended by a score of marriage-minded debutantes, and warned the young men they shall lose their quarterly allowance if they thwart her matrimonial schemes.

Miles – The summertime gathering is a good excuse for Miles to reminisce with his cousins about the mischief they have gleefully caused their aunt throughout the years. The allowance would benefit his upcoming return to Egypt, financing his quest for antiquities, but a bride is not in his plans…until he rescues the beautiful widow Gemma and her pesky cat Snowball from some treacherous rosebushes.

Richard – His resistance to marriage makes him utterly irresistible to the marriageable females in attendance. Unfortunately for them, he is only interested in Constance, a doctor’s daughter who refuses to give her heart again, especially to a charming scoundrel who extracts secrets for a living. When his wooing has little effect, he proves his devotion in another way—with a fairyland hideaway he has created just for her.

William – He is the quiet one that people rarely notice unless he is sketching their likeness. His aunt’s paid companion, Honora, a budding artist, has been both his muse and the source of his inability to paint since their first brief encounter two years previously. A series of secret art lessons benefits them both, and their budding attraction is given a chance to finally blossom.

I have worked as an attorney, winery tasting room manager, and retail business owner, but nothing beats the thrill of writing humorously-ever-after romances.

I reside in New England, although I fantasize about spending the rest of my days in a tropical locale, wearing flip flops year-round, or in Regency London, scandalizing the ton.

Posted in Regency| Tagged Donna Cummings, Regency Romance, Where Have All the Scoundrels Gone?|

4 thoughts on “Where Have All The Scoundrels Gone? By Donna Cummings @BookEmDonna #RLFblog #Regency”