Posted on  01/29/2017 by Kayelle Allen
Article by Beppie Harrison
I came late to my love of Ireland
and I can’t explain why Donegal spoke to me so insistently. Maybe it’s the way it’s said. You hear the rhythm of it: DONeegol, sort of
wrapping your tongue around the last L. It’s stuck way out on the end of Ireland,
as far west and north as you can go. It’s a land of peninsulas reaching out
into the cold Atlantic. The largest one is Inishowen, and that’s where I chose
to place the beginning of the second book of Diarmaid the Irishman, because it’s
cold and harsh and has always demanded more from its inhabitants than they
sometimes had to give. Not much grows there. There are the peat fields that
gave the Irish there the material for their sweet-smelling peat fires to warm
their houses—primitive huts for much of their history. The farther east you go
the better the land becomes, and you can grow potatoes and oats. That’s what
the ordinary people lived on, traditionally. Oat porridge cooked over a peat
fire morning and evening, with potatoes for the main meal. Fish, sometimes, if
they were lucky. “Kitchen,” the fish would be called. Anything extra
from potatoes and porridge was kitchen. Sometimes a bit of meat—chicken,
perhaps. Eggs would be a lovely luxury, but eggs were better sold for people
who had no other way to earn coin.
A hard place, but a beautiful one
for those of us who don’t need to make a living out of

the unwilling land.
Spectacular cliffs soar out of the churning ocean, and then, all of a sudden, a
sweep of a golden sand beach. Now tourism is coming to save Donegal, for those
who like a gentle sun and don’t mind icy cold water. There are new roads which
allow you to have a feeling for the land, the low peat fields and the small
stretches of farmland, and there are old ones requiring nerves of steel and
sharp attention as a narrow road winds treacherously around the cliffs with
awe-inspiring views of the ocean battering rocks almost directly below.

Then of course there are the
people. In some places they cling to the old ways and even teach their babies
to speak Irish. There are three areas of Gaeltacht in Donegal—designated areas
within which Irish speakers predominate, although the use of Irish is
inevitably dwindling, given the global reach of English. Donegal people are as
Donegal people have always had to be, sturdy and stubborn and set in their
ways. But Irish they still are, which is to say they love to talk in the warmth
of their pubs and are, in their way, welcoming to strangers.
The more I learned about Donegal,
the more it seemed to be the perfect place to begin my story of Diarmaid
MacGuinness as a dedicated Irish rebel, red-headed, in a secret organization,
and determined to return the green and pleasant land of Ireland to Irish rule,
in spite of his own inconvenient ties to the Anglo-Irish aristocracy. His
mother had worked for them for years and, unknown to them, he had grown up in
the Big House himself. Caught by unwilling trust, he was half drawn to those
who should be his enemies and half determined to push them and all like them
into the Irish Sea, back to England where they had come from.
I love Donegal. But I will always
be a visitor there. Unlike its people, I’ve never had to wrest a living from
its stubborn soil, and so will always be an outsider. Perhaps it’s better that
way.

About Diarmaid the Irishman 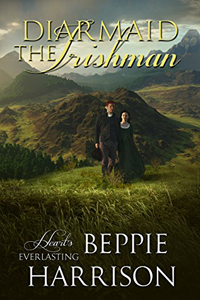 It’s 1810. The English have a firm grip on Diarmaid’s
beautiful green Ireland. But Diarmaid McGuiness is determined to make that grip
impossible to maintain. In the first half of this two-volume combination (The
Divided Heart) we meet the reckless, red-haired Irishman as he tries out his
wings as a rebel to follow in his dead father’s footsteps. In the second half
(The Defiant Heart) we find Diarmaid as the determined leader of rebels that he
has become, and the equally fierce, equally red-headed girl whose resolve to
free Ireland is as strong as his own. Their clash leads them into unforeseen
complications and new ambiguous challenges.
Genre Historical romance
Author Beppie Harrison
Book heat level (based on movie ratings): PG-13
Publisher Camden Hill Press
Amazon https://www.amazon.com/dp/B01CR6796M/

Beppie Harrison lives in Massachusetts with her English
husband, two slightly addled cats, and an enthusiastic puppy. England with
friends and family is a second home, Ireland a fascination that came later. She
writes books placed in the Regency period, many of them in Ireland. The beauty
of Ireland, its harshness, and the wonderfully garrulous people are close to
her heart.
Website http://beppieharrison.com
Blog http://romancingyesteryear.com/Blog
Twitter: http://twitter.com/queenskeys
Facebook http://facebook.com/beppieharrison
Pinterest http://pinterest.com/beppieharrison