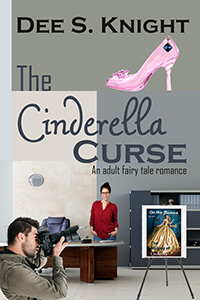 Dee S Knight, welcome to Romance Lives Forever. I’m Kayelle Allen, author and owner of this blog. Happy to have you here! Thanks for sharing two tips with us today, but first, please tell us about The Cinderella Curse.

In this tale, Charlotte dreams of her prince, James, but learns about beauty and love from her fairy godfather, Cooper. She might not lose a glass slipper, but her heart is in danger of being left behind. One thing for sure, by the time our Charlotte arrives at the ball, she’d sure like to know which man is her real Prince Charming.

Know the Heroine from The Cinderella Curse

It’s late, she’s bored. What does she do?

Before meeting Cooper, her very own fairy godfather, Charlotte would have tried to catch up on work or (better yet) take the chance to sleep. Her two bosses, much like ugly stepsisters in the original Cinderella, work her to the bone, leaving her sleep deprived all too often. Since meeting Cooper and giving in to her “makeover,” he keeps her busy but with fun excursions to antique malls and sexy explorations in bed. With Cooper she’s almost never bored.

What kind of food would she impulse buy if hungry?

A Baby Ruth candybar. Usually she eats healthfully, though.

Describe the kind of clothes she prefers to wear.

Nothing that emphasizes her figure. She’s more a hide-the-shape kind of woman. She’s learning to get past that and wear more clothes that flatter her shape and coloring. Cooper is teaching her. Even now, though, she likes slacks and blouses for work, jeans and tees for casual.

Does she know how to fix things?

Basic things she’ll try but anything that hints at complexity she hires someone to fix. She can change a tire but won’t tinker under the hood, for example.

She tried to do something and it went badly. Tell us about it.

Charlotte has had her Prince Charming in mind the whole time she’s worked with Cooper, and she’s tried hard to remind him as they’ve been together that becoming a woman James (the PC she has in mind) would want to love. But when it comes time to plan a date with James, she botches telling Cooper. He’s angry and disappointed, and she has no idea how to fix things.

How does she act around children she doesn’t know?

Gosh, I don’t think she meets any children in the book. She’s a little shy but kind so I think she would get along well with them.

What is she like first thing in the morning?

Can she use chopsticks?

No. But she never had anyone show her how, either.

Coffee, yes. Milk and sugar, no. She grew up in the country (Kansas) where they didn’t mess around with coffee additives.

What apps would she have on her phone?

The app for the magazine she works for. One for Scrabble and a crossword app.

Earrings, but nothing too large or dangly

No tattoos. Maybe Cooper will talk her into something…

Personal vehicle. Richmond is a great city but it’s not known for its fabulous public transportation.

Recycle though she isn’t rabid about it.

Where to buy The Cinderella Curse

A few years ago, Dee S Knight began writing, making getting up in the morning fun. During the day, her characters killed people, fell in love, became drunk with power, or sober with responsibility. And they had sex, lots of sex.
After a while, Dee split her personality into thirds. She writes as Anne Krist for sweeter romances, and Jenna Stewart for ménage and shifter stories. All three of her personas are found on the Nomad Authors website. And all three offer some of the best romance you can find! Also, once a month, look for Dee’s Charity Sunday blog posts, where your comment can support a selected charity.
Website: https://nomadauthors.com
Blog: http://nomadauthors.com/blog
Twitter: http://twitter.com/DeeSKnight
Facebook: https://www.facebook.com/DeeSKnight2018
Goodreads: https://www.goodreads.com/author/show/265222.Dee_S_Knight
Amazon: http://www.amazon.com/-/e/B079BGZNDN
LinkedIn: http://linkedin.com/in/dee-s-knight-0500749
Sweet ‘n Sassy Divas: http://bit.ly/1ChWN3K
Get to know Dee S Knight better by signing up for an email newsletter: https://landing.mailerlite.com/webforms/landing/h8t2y6