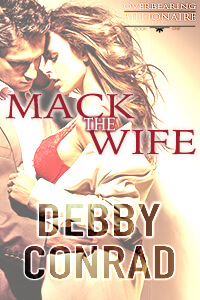 Debby Conrad, welcome to Romance Lives Forever. I’m Kayelle Allen, author and owner of this blog. Happy to have you here! We’re excited to find out more about your hero, but first, tell us about the book.

Mack the Wife by Debby Conrad

Mackenzie O’Brien believes the only way her overprotective brothers will stay out of her life and find loves of their own is if she is married and settled. When an old love returns to town, Mackenzie is anxious to see if she and Grady Sullivan can pick up where they left off.
Grady tries to fight his attraction to Mackenzie. He wants nothing to do with the spoiled little rich girl who broke his heart years ago or her ridiculous marriage scheme. He’s a cop, living on a cop’s salary and she is way out of his league. And besides, her brothers hate him.
But Mackenzie won’t take no for an answer—until Grady suspects one or more of her brothers may be guilty of murder. Then she has no choice but to reconsider her plans. Because when it comes to family, the O’Briens stick together, even if it means giving up on love. Or does it?
Crystal Lake series:
Book 1 Mack the Wife
Book 2 Aidan’s Way
Book 3 Chasing Connor
Book 4 Hunter’s Reluctance
Book 5 Blaming Owen

Know the Hero from Mack the Wife

Here are some fun questions to help us know your hero.
It’s late, he’s bored. What does he do?
Spends time with his black Labrador Retriever, Lucky.
Describe the kind of clothes he prefers to wear.
Jeans, t-shirts and boots. Cop’s uniform while on duty.
Does he know how to fix things?
Yes. In addition to being a cop he is building a home on the lake. He is very handy.
He tried to do something and it went badly. Tell us about it.
Got caught “literally” with his pants down while having sex with Mackenzie when they were eighteen. Mack’s brothers have hated him ever since.
What is he like first thing in the morning?
A little weary. He works hard, has a lot on his plate.
Can he use chopsticks?
No. He’s a man’s man. Give him a shovel and he’ll show you a few moves.
Does he drink coffee? If so, how does he take it? If not, what does he drink instead?
Black
Beard or clean-shaven?
Clean-shaven.
Personal vehicle or public transport?
Personal vehicle. Black SUV.
Thanks for helping us get to know your hero!

Where to buy Mack the Wife

Sexy reads with a dash of humor and a slice of suspense!
Debby Conrad has been spinning tales since junior high school when she would force her younger sister and a few close friends to listen to her fantasies and dreams. Back then she had no idea her silly tales would end up in print, or that her later dream of becoming a novelist would come true.
Debby lives with her husband in NW Pennsylvania, has two grown daughters, five grandchildren and a miniature Dachshund who does not like being ignored while she writes.
As an award-winning author, with 26 published romance novels to her credit, it is always a surprise as to what she will work on next. Even she doesn’t know sometimes; not until the fingers hit the keyboard. She recently completed Love, Lies and Bow Ties, the 8th and final book in the Love, Lies and More Lies series. Other series include the Crystal Lake series, Chance at Love series and the Orchard Falls series.
Website www.DebbyConrad.com
Twitter https://twitter.com/ConradDebby
Facebook www.facebook.com/DebbyConradAuthor
Amazon Author Page http://www.amazon.com/DEBBY-CONRAD/e/B007DTF646/