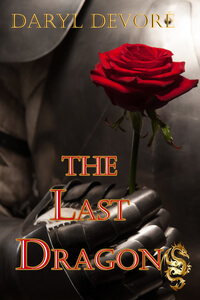 Discover a knight, a dragon, and ancient sorceress and a heart-breaking secret in Daryl Devore’s medieval fantasy romance, The Last Dragon.

Daryl, welcome to Romance Lives Forever. I’m Kayelle Allen, author and owner of this blog. Happy to have you here! We’re excited to find out more about your hero, but first, tell us about The Last Dragon.

The Last Dragon by Daryl Devore

What do dragons, knights and romance have in common? Grab a copy of multi-published author Daryl Devore’s medieval fantasy romance – The Last Dragon and discover the answer.

A sorcerer craving dominance merged with a dragon, the power overwhelmed him causing him to split into three dragons. Demora ruled thought, but was lost in time. Yidithe offered protection, shining like the light of the sun. Ayrradex craved chaos, revelling in destroying souls.

Many knights died, attempting to slay the devil beast. One knight, Prince Hawkyns, did not fear death. He’d lost everything. Away on a mission when Ayrradex attacked his father’s kingdom, Penrythe, Hawkyns returned to find his noble father – feeble and defeated. His wise mother – crazed. His beautiful wife and unborn child – dead. Only a pile of ashes remained for him to bury. He knelt before his King and vowed to slay the devil-beast or be slain.

Derry was born with powers that terrified her parents. They delivered her to a nunnery to be raised in secret. Jathe, a wise sorceress, discovered the young girl and trained her to one day use the secret hidden in her soul.

Legends spoken around campfires hinted the sole way to destroy Ayrradex was when the hearts of a knight and a golden dragon became one. But after a vicious battle with Ayrradex, the golden dragon was thought to be dead.

Can Prince Hawkyns’s bravery and Derry’s powers end the reign of the devil-beast’s terror?

Know the Hero from The Last Dragon

Orders wine and food then puts his feet up close to the fire and discusses politics with his father, the king.

Buy? He’s a prince. Food is ordered whenever he wishes to eat.

A simple tunic and leggings, easier to train in than the awkward suit of armour and less pretentious than formal court attire.

He can right a wrong. He can slay a demon. But, fix a broken wheel on a wagon or shoe his horse, he has no clue.

When he had lived 12 summers, the devil demon dragon, Arraydex, attacked and he grabbed his sword and attempted to fight it. Being too young and too weak, the dragon quickly bested him. He was saved by…spoiler – can’t tell you.

With proper court manners and compassion.

When Hawkyns awakes, he is ready to face the challenges of a new day.

How does he handle things when in a “proper” social situation?

As a prince, he has courtly manners and is appropriate in every situation.

At the castle, he has a servant who looks after his needs. He is currently looking for a new squire to aid him in his duties as a knight.

What is a shirt? He wears a tunic when training with the other knights.

Sleeves buttoned or rolled up?

In fancy court dress, there are buttons, but in his day to day wear his sleeves are rolled up to facilitate sparring or battle.

Natural hair. Kept at proper length when at court, but often it is shaggier when he is away on long military campaigns.

Horseback on his faithful steed, Gladur.

Where to buy The Last Dragon

Two writers in one. Daryl Devoré writes hot romances with sexy heroes and strong heroines and sweet romances with little to no heat. She has several published books available on Amazon in ebook or print book and available at other book retailers via Books2Read.
Daryl (@daryldevore) lives in an old farmhouse in Ontario, Canada, with her husband and 2 cats. Daryl loves to take long walks on her quiet country road or snowshoe across the back acres, and in the summer, kayak along the St. Lawrence River. She has touched a moon rock, a mammoth, and a meteorite. She’s been deep in the ocean in a submarine, flown high over Niagara Falls in a helicopter, and used the ladies room in a royal palace. Life’s an adventure and Daryl’s having fun living it.
Blog https://daryldevore.blogspot.com/
Twitter https://twitter.com/daryldevore
Pinterest https://www.pinterest.ca/daryldevore2013/
Instagram https://www.instagram.com/daryl_devore_hot_romancewriter/
Goodreads https://www.goodreads.com/author/show/4686566.Daryl_Devore
BookBub https://www.bookbub.com/profile/daryl-devore
Amazon Author Page https://www.amazon.com/-/e/B004TJ1354
Get to know Daryl Devore better by signing up for an email newsletter