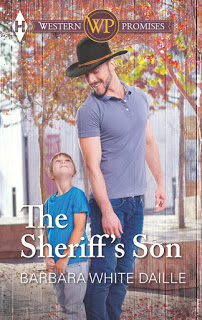 Title  The Sheriff’s Son
Genre  Contemporary romance
Author  Barbara White Daille
Book heat level (based on movie ratings G, PG, PG13, R): PG-13
Why is Tanner Jones back in town?
Seven-year-old Kevin has been a handful for single mom Sarah Lindstrom. And when the new sheriff shows up holding Kevin by the scruff of his neck for egging his car, she knows she’s lost control.
Sheriff Tanner Jones has no idea Kevin is his son. He lost the right to that information when he abandoned Sarah soon after graduation. Just because he’s back in town doesn’t mean he can waltz into her life—and Kevin’s. But Sarah can’t deny the feelings she still has for Tanner, or how her son is benefiting from his attention.
When Tanner finds out the truth, what will he do?

Barbara White Daille lives with her husband in the sunny Southwest. Though they love the warm winters and the lizards in their front yard, they haven’t gotten used to the scorpions in the bathroom.
Barbara’s new series, The Hitching Post Hotel, features a matchmaking grandpa determined to see his three granddaughters wed. The series began with The Cowboy’s Little Surprise, and the latest book is The Lawman’s Christmas Proposal (released in December 2015). Cowboy in Crisis will debut in July 2016, with other books in the series to follow.
Barbara’s first book, The Sheriff’s Son, has just been reissued in both larger print and a new e-book version, available exclusively from Harlequin. The original version is also still available at most major e-tailers, including Amazon.