Cry Me A River By Livia Quinn @liviaquinn #RLFblog #paranormal 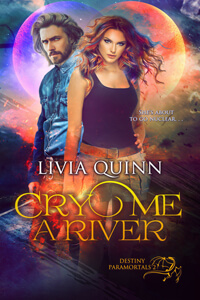 Today’s featured book is Cry Me a River by Livia Quinn.

Is it Mayberry or Middle Earth? – The Paramortals have a saying, “One meets his destiny on the road he takes to avoid it.” Our new sheriff said it differently, “Paramortal, my A**!”

My name is Tempest Pomeroy. For nineteen years I denied my heritage, until my brother’s genie bottle went missing. Time is running out for River, and the attraction that was growing between me and Sheriff Jack Lang derailed after a series of shocks sent us both reeling, and he got his first glimpse of my Paramortal “talents” – a few measly bolts of lightning aimed at his—in his general direction. In the course of the investigation we’ve gone from attraction to suspicion, support to friendship, romance to oh-my-god-get-away-from-me revulsion.

Jack’s an ex-Navy pilot. He says he wants to know “everything”. My ex-lover, but after we answer Jack’s questions, he’ll either join us, or grab his daughter and take the first jet out of Middle Earth.

He might help me save my brother and discover the whereabouts of my parents, but he probably won’t still want to take me to the Mardi Gras ball, once he knows “everything”. There’s a lot of everything.

Livia Quinn is a DC native living on the bayou in Louisiana. She’s written thirteen books, both contemporary military romance and urban fantasy based around her fictional Storm Lake. In her jobs as plant manager, mail lady, computer instructor, professional singer and salesperson she’s collected many stories and quirky characters to share with her readers. She is a staunch supporter and advocate for our service men and women.