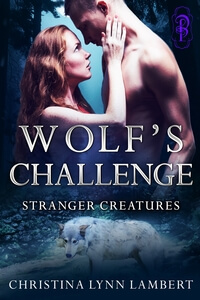 Christina Lynn Lambert, welcome to Romance Lives Forever. I’m Kayelle Allen, author and owner of this blog. Happy to have you here! We’re excited to find out more about your hero, but first, tell us about the book.

When Sydney left Seattle two years ago, she was scared, traumatized, and done with men for good. Now she has a good job, a hobby that’s fast becoming a second career, and best of all, she’s adopted a little girl named Angel. Life is good and Sydney’s not about to let charming lawyer Derrick mess that up, no matter how sexy he is, or how sweet he seems.

Things aren’t always as they appear in the town of Great Oaks, Virginia. Derrick isn’t the ladies’ man Sydney thinks he is, but he does have a few secrets, such as his ability to transform into a powerful wolf at will.

Can Derrick convince Sydney to give him a chance, something more than her elusive maybe? More importantly, should he? He’s still trying to forgive himself for being at the wheel during the accident that killed his son. Losing Sydney when she learns the truth might break him, but he’s pretty sure not having her in his life would be just as bad.

Know the Hero from Wolf’s Challenge

Derrick loves science fiction and horror so he would probably watch an episode of the X-Files or maybe read a scary story or a comic book. He’s a closet comic book nerd.

He doesn’t like sweets so he would snack on some jalapeño fries or nachos with spicy chili and cheese.

He’s usually well dressed for work because he’s a lawyer but truthfully, the salespeople at his favorite store pick out clothes for him and tell him what matches. He just follows directions.

He can fix things around the house. His dad taught him the basics well enough that he can fix a cabinet without destroying the house.

For a while, he tried to ignore the shifter part of himself which led to him feeling aggravated and angry at himself and everyone else. He even tried to take a substance that would put an end to his need to shift to wolf form. Luckily, it didn’t work for more than a few days. He’s regretted trying to disconnect from his wolf side ever since and vowed to never again ignore the wolf.

Derrick was a father and even though his child died in a car accident, he’s still comfortable around kids. His outgoing personality helps him get to know the daughter of the woman he’s fallen for.

Not too bad, especially if he can make the time for a run in wolf form before starting his day. A little green tea or coffee helps too.

Being a shape shifter comes with risks. People have been known to hunt shifters to either kill or study in a lab. Derrick tells only the people he can completely trust about his abilities. He’s careful to not shift anywhere he could be vulnerable.

Derrick lost a lot of time with his young son by working so much. He came to realize the importance of making time to relax and spend time in his wolf form. He’s working on delegating more of his responsibilities with work and learning not to take on too many projects.

Not by choice. A brand of the letter e marks his ankle. Someone from the Equalizers, a group whose goal is to harm shifters, found Derrick unconscious after a horrible car accident. They poisoned him with a drug that makes it hard for shifters to heal completely, then burned his ankle with the letter e and ground the drug into his burn, ensuring that he would know which group was responsible for his difficulty healing.

He drives. There aren’t a lot of public transportation options where he lives.

Recycle. He’s all about keeping the earth as green and healthy as possible. For shifters, having wooded areas to be able to run in their animal form is important, and he knows that unpolluted land, air, and water are vital to every living thing.

Where to buy Wolf’s Challenge

A few years ago, I read my first romance novel and I was hooked, so much so that I decided to give the idea of writing a story a chance. Love, courage, hope, and second chances are a few of my favorite themes. My stories include a fair amount of sarcasm, suspense, steam, and violence. When I’m not writing, I enjoy spending time outside and finding ways to avoid cooking. I live in beautiful Virginia with my husband, two daughters, and a sweet, hairy monster of a dog.
Blog https://christinalynnlambertwordpress.com
Twitter https://www.twitter.com/chris4lamb
Facebook https://www.facebook.com/christinalynnlambert
Instagram https://www.instagram.com/christinalynnlambert
Goodreads https://www.goodreads.com/author/show/15900423.Christina_Lynn_Lambert
Amazon Author Page https://www.amazon.com/Christina-Lynn-Lambert/e/B01MCYK0K7