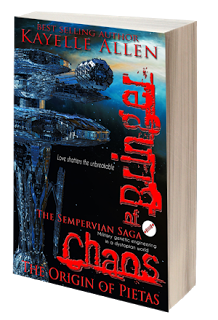 The featured book is Bringer of Chaos: the Origin of Pietas by
Kayelle Allen, owner of the Romance Lives Forever blog.

Publisher: Romance Lives Forever Books
Heat level: PG13
Genre: YA (older young adult), action adventure, science fiction, space opera, military
science fiction, space marine, genetic engineering
Two enemy warriors: one human, one immortal. Different in belief, alike in spirit,
marooned together on an alien world.
Imprisoned and in isolation over a year without food or water,
the immortal Pietas survives. Though broken in body, his intellect and will are
intact, thanks to Six, the special ops warrior who captured him, but kept him sane.
The warrior had no hand in his deprivation and, like Pietas, was betrayed by his
own kind. When Pietas is abandoned on an alien world with nothing but his honor–and
Six–he must find and rejoin other immortal exiles. After centuries of war, Pietas
detests humans and kills them on sight, but he is too damaged to continue on his
own. Though he despises needing help, he allows Six to nurture and restore him to
full strength, and then accompany him. As they cross the planet together on foot,
the immortal begins to wonder if he has found his first human friend, or if Six
is loyal only because Pietas could keep the others from tearing him to shreds. This
human will either be his closest living friend, or the one whose betrayal will trigger
all-out vengeance by the most powerful immortal ever born.
Immortal. Warrior. Outcasts. Traitors took everything. Except
their honor.
Read the first chapter https://kayelleallen.com/chaos-origin/

Please help Kayelle get the word out

Kayelle Allen is the owner of the Romance Lives Forever blog,
and a best selling American author. Her unstoppable heroes and heroines include
contemporary every day folk, role-playing immortal gamers, futuristic covert agents,
and warriors who purr. She is the founder of Marketing for Romance Writers, and
owner of The Author’s Secret.
Homeworld https://kayelleallen.com
Twitter https://twitter.com/kayelleallen
Facebook https://facebook.com/kayelleallen.author

One thought on “Review Or Support: Bringer Of Chaos #RLFblog #Chaos #scifi”