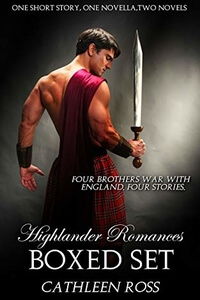 Cathleen Ross, welcome to Romance Lives Forever. I’m Kayelle Allen, author and owner of this blog. Happy to have you here! Please tell us about Highlander Romances.

The Highlander Romances is a boxed set of four Forbidden Fantasy stories: Highlander (short story), Highlander in Her Bed (novella) and two novels, In Her Wild Highlander’s Bed and My Highland Lover.

Scotland 1308 Sir David McLaird is a prisoner of Sir James Bruce. When healer, Lady Arabel Bruce tends to his wounds he doesn’t expect to fall in love. The trouble is Arabel is from the enemy clan.

Lady Arabel loves the wild highlander but won’t betray her clan and marry him, until Sir David abducts and makes her his.

When Sir Jasper Bruce discovers a lady hiding under his bed in the castle he has just conquered, he doesn’t expect to fall in love.

Lady Rosamund Percy can think of nothing else except escaping to England when her Scottish betrothed leaves her stranded. The trouble is Sir Jasper considers her a delicious prize of war. How can she convince him to let her go when he wants her in his bed?

1314 Highlands Grieving widower, Sir Eoin Bruce is forced to marry wealthy Lady Jehanne de la Croix in order to keep her dowry in Bruce hands. Eoin hates enchantment of any kind and he soon discovers Jehanne is the witch who haunted his dreams. She brings him more titles and wealth than he ever thought possible as a second son of a laird. Can he overcome his grief and go against everything he believes in to love her?

Jehanne de la Croix wants nothing more than to be safe and loved by her husband, Sir Eoin Bruce but she was born from a line of great seers. If she can’t get Eoin to accept her prophesies, she will burn at the stake and he will meet a violent end. Everything rests on Eoin and his willingness to love a witch.

What is the appeal of highlanders?

What makes them great romantic heroes?

Without a doubt Highlanders are the ultimate hero but what makes them so popular year after year?

I’ve been drawn to writing Highlander stories for years from the time I had a dream about a dispossessed knight who wanted to get his land back. In the dream, his name was The Black Douglas. I woke up thinking, what an odd dream, made even odder by the fact that the voice in my head was still speaking until I was properly awake.

to find out he was in fact, a dispossessed knight in the time of Robert the Bruce. I spent several enjoyable years writing the story of four Bruce brothers, which I have put into a boxed set.

It’s the characteristics of the Highland hero that make for exciting writing. That never-give-up spirit combined with a war-like national spirit. The Highland charge made Scottish soldiers formidable on the battle field. It was not uncommon for the English soldiers to run for their lives. It was the Battle of Culloden in 1746 that finally broke the back of the Highlanders. Under the Duke of Cumberland, King George 11’s son, the English used every form of cruelty take no quarter to defeat their enemy the Scots.

Cumberland’s troops were encouraged to rape, pillage and plunder anyone suspected of being Jacobites including men, women and children, which in the end only served to render Cumberland, the name of The Butcher.

It was this level of brutality that earned the Scots the level of sympathy not previously given to the warlike nation. The poet and writer, Sir Walter Scot born August 15, 1771, Endinburgh, Scotland to September 21, 1832, grew up listening to the tales of the Highland rebellion. He wrote a series of novels now called the Waverley series, which expressed the dichotomy between the need to modernise Scotland and the loss of the Scottish national spirit. The Waverley novels romanticised Scotland, adding to the tradition of the romantic historical novel.

As readers we want to hear about the struggle before we get to the victorious ending. Scottish stories fit in well here because every victory was tinged with poverty and struggle and ultimately defeat. All elements of good story fodder.

Where to buy Highlander Romances