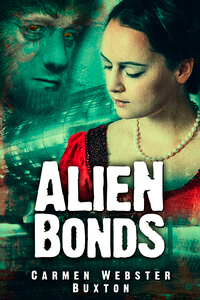 Carmen Webster Buxton, welcome to Romance Lives Forever. I’m Kayelle Allen, author and owner of this blog. Happy to have you here! Please tell us about your book.

Book heat level (based on movie ratings): R for subject but no steam on the page

Welcome to Wakanreo where no one is judged by their looks or their partner in life.

A story of two very different people from two very different cultures, a sort of Avatar combined with Pride and Prejudice. In Alien Bonds, two lives are changed in an instant. Industrial chemist Dina Bellaire travels all the way to the planet Wakanreo to advance her career. Her carefully planned life goes up in flames the second she meets Kuaron Du, a Wakanrean who makes his living singing ancient songs in a dead language. Both of them know they can’t go back to the way they were before they met. They just have to convince the rest of the universe that what happened to them is real.

What species/races of people are in your book?

Do you have non-sentient creatures or animals in your story? If so, what are they?

There is a mention of small Wakanrean animals kept as pets but they are not really featured as important.

This section describes languages and culture in your story world.

What languages are spoken in your story universe?

Most of the galaxy speaks a language called Standard but on Wakanreo, most of the native population grows up speaking their local language of which there are several.

If you created a language for the story, what is it called?

I created a local dialect called Wisutan, for the region around the city of Wisuta.

Please give us a few words in this language and their translation.

In the culture of your story world, what is different from ours?

Wakanreans are the only known sapient species that mate from biology rather than choice. When two people who are unmated and have compatible pheromones come near each other, there is no stopping the process, which is known as shahgunrah. This had made their cultures more egalitarian, as they cannot control who pairs off with whom and thus have no real class system. It has also made them more tolerant. Because sex is not a conscious choice, it is not associated with immorality or sin.

What special laws are important to your story world?

Because the mating process known as shahgunrah has shaped Wakanrean cultures so thoroughly, Wakareans fear to change it. For this reason, research into how shahgunrah works is prohibited on Wakanreo.

What rights (such as equality) are challenges for your characters?

Equality is not an issue on Wakanreo, but Dina, our heroine, does have to prove she is sane before she is allowed to return to live with Kuaron, the Wakanrean she finds herself mated to.

Writers usually know more about their story world than they can say in a book. This is your chance to show off things you couldn’t say or had to imply rather than state.

Wakanreo will always be different from other worlds because its people are so different. One way in which the difference is obvious is that looks don’t matter. If one person in a mated pair is beautiful and the other is homely as sin, no one pitied the beautiful partner or considers the plain one lucky. Likewise, in careers, looks don’t help you advance.

Describe one of the worlds where your story takes place.

The story takes place entirely on Wakanreo, the birthplace and home of Kuaron Du, the hero of the story, It’s a world that is very similar to earth as far as size and gravity, but it is a little colder, which might be why it’s dominant species still has fur.

What makes this world unique?

Wakanreo is unique only because its dominant species mates for life through a biological process called shahgunrah.

Tell us about the age of the culture in your story, i.e., are the people part of an ancient civilization, a newly formed group within an established culture, pioneer colonists, etc.

Until they were discovered and contacted by the Third Confederation of Planets about 70 years before the story starts, Wakanreans were isolated on their world. Their civilization is well established and they are known for their excellent use of chemical technology.

What food or drink is available to your characters?

Wakanreans reject technology when it comes to food. Although synthesizers are available, they prefer to prepare food manually, cooking over a stove or in an oven, as it is important to their culture. They make good use of vegetables but also eat meats. A favorite treat is a sea creature similar to a shrimp but it is served with a garnish of mold.

In what ways was it helpful to have a map (or sketch of one) for your story? (Provide a link to an image, if available)

I made a rough sketch of the continent on which the story takes place so I would know where cities were in relation to each other, but I did not use it that often and did not keep it.

Whether your characters are humans on a new world, aliens on our world, or something in between, this section discusses their physical nature.

What are the physical characteristics of the race/species of your main characters?

What physical differences exist in the way your characters communicate (i.e., telepathy, empathic abilities, etc.) with each other?

Wakanreans speak aloud, as humans do, but when shahgunrah happens, the mated couple are empathic, but only with each other.

What differences, if any, exist in the way your characters reproduce?

Although the selection of a mate is different, reproduction happens the same was for humans and Wakanreans, They are actually very similar because like us, their genetics are based on DNA, just as ours are.

Are there more than two genders in your story world and if so, what are they?

There are only two genders, but as same-sex shahgunrah (mating) sometimes take place, Wakanreans have always been tolerant of it; everyone knows there is no choice involved in shahgunrah.

This section lets you share things you learned while writing.

Please give us three tips you find helpful when creating a story world:

Try to think of something that’s different about the world—gravity, atmosphere, land masses, etc. 1) Ask yourself questions about the geography of the planet: Does it have oceans? Does it have continents or maybe only islands? 2) Then think of how the geography would influence the creatures who live there, intelligent and otherwise. 3) Next decide on who or what lives on this world? Does it have a dominant, sapient species? If so, what are they like and how advanced are they, technologically. Consider on the impact that contact with other species will have on this world.

When you researched for your story setting, what kinds of things did you learn?

I thought about making Wakarean eyes have vertical pupils, like cats’ eyes have, but researching it, I discovered that only species that are near the ground when they walk tend to have those kinds of pupils. Ergo, I rejected it; it actually worked better for them to have similar pupils to humans have them, because it made one less thing to account for in having hybrid human and Wakanrean individuals.

What things should writers avoid when building a science fiction world?

Don’t make it totally uniform! Think about all the different cultures we have on earth. There should be similar differences on a made-up world, depending on how far apart areas are geographically. Also, don’t ignore the effects of whatever physiology you choose to give your aliens. That could influence a culture; for example, a species with a highly developed sense of smell could have taboos about using strong scents such as perfume or incense.

Share a resource you found helpful when researching for your story.

The web in general is useful. Google is a good start for finding sources. The actual source will depend on what information you’re looking for.

What’s your advice for writers who want to create a solid background for their story world?

Think it through before you start plotting your story, or at least before you finish deciding on the outcome. Try to imagine living on the world you’re creating. What would strike you as different?

Where to buy Alien Bonds

Carmen writes science fiction, fantasy, YA, and romance. She had a peripatetic childhood, as her father was in the US Navy. She has lived in eight different states, but no matter where she lived, she was always reading books. Her tastes were eclectic, ranging from mysteries to science fiction to romance. Having raised two wonderful children, she has settled in Maryland with her husband and a beagle named Cosmo.
Website https://carmenspage.blogspot.com/
Blog https://carmenspage.blogspot.com/
Twitter https://twitter.com/CarmenWBuxton
Facebook https://www.facebook.com/carmenwebster.buxton
Goodreads https://www.goodreads.com/author/show/4770583.Carmen_Webster_Buxton
BookBub https://www.bookbub.com/authors/carmen-webster-buxton
Amazon Author Page https://www.amazon.com/Carmen-Webster-Buxton/e/B004V8MM8U