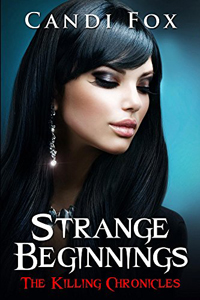 Emmeline Blackwell’s life has been surrounded by death since she was a little girl. Now death, in the form of man, is stalking her. The man who tried to kill her once is still trying to take her life from her. Because of him she is always looking over her shoulder. She has been running from him for years, but must now take drastic measures to hide from the lunatic.

She moves across country to a smaller city to hide among the populace. Emma has to change everything, including her name, in order to hide her past from everyone.

Cord Masterson is the sheriff of Stillwater, OK who hides a deep secret of his own. Sparks fly the moment the two meet. But it appears that even sparks can’t keep her past at bay. When young women are found murdered in Stillwater, can Cord keep Emma safe from her past and still manage to be a part of her future?

Candi Fox, co-host of the wildly popular radio show Candi and Company with over 900 thousand listeners began her venture in the paranormal at the tender age of two, when she witnessed her first apparition. From that moment on the paranormal seemed to follow her. No matter where she moved, the house she lived in the house next door, or the house down the street always seemed to be haunted.

She often wondered if she drew the spirits to her. Little did she know that she was indeed a magnet of sorts. It wasn’t until she was in her late twenties that she found people who could not only explain her gifts, but would also help her hone them. Armed with this new knowledge she began to openly explore hauntings and other paranormal phenomena.

Growing up in Indiana lent her the opportunity to explore many famous haunted places including the Hannah House, which was once part of the Underground Railroad. A little over two years ago she moved to Tulsa, OK and has began to explore the haunted landscape in a new state.

Candi lives with her husband, and furry children in Tulsa. She is passionate about the occult, saving and rehabilitating horses, horseback riding, magic, all things mystical and has her Reiki Mastery.

She uses her own paranormal experiences as well as her own life traumas to write from a grounded and realistic perspective about subjects that are hard to talk about and even harder to feel for yourself.