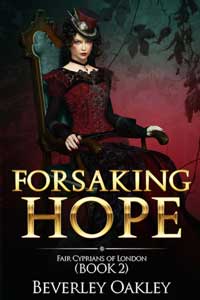 Two years ago, she missed their secret assignation and disappeared without a trace. Now the divine “Miss Hope” is in Felix Durham’s bed – a ‘surprise cheering-up gift’ sourced by his friends from London’s most exclusive brothel. Felix is in heaven – and he wants to stay there.
So does Hope, but she can’t.
Hope Merriweather lives by a code of honour – even if she’s a prostitute.
Having sold her soul, she’s prepared to sacrifice everything else to protect what she believes in.
Even if honour – in her eyes – comes at the cost of thieving and breaking hearts. Including her own.
Genre Historical Romance
Book heat level (based on movie ratings): Mature Audience
Amazon http://amzn.to/2BPFtW8
Barnes and Noble https://www.barnesandnoble.com/w/forsaking-hope-beverley-oakley/1127001396
iBooks https://itunes.apple.com/us/book/forsaking-hope/id1274219782?mt=11
Kobo https://www.kobo.com/au/en/ebook/forsaking-hope

Beverley Oakley was seventeen when she bundled up her first her 500+ page romance and sent it to a publisher. Unfortunately drowning her heroine on the last page was apparently not in line with the expectations of romance readers so Beverley became a journalist.

Twenty-six years later Beverley was delighted to receive her first publishing contract from Robert Hale (UK) for a romance in which she ensured her heroine was saved from drowning in the icy North Sea.

Since 2009 Beverley has written more than thirteen historical romances, mostly set in England during the early nineteenth century. Mystery, intrigue and adventure spill from their pages and if she can pull off a thrilling race to save someone’s honour – or a worthy damsel from the noose – it’s time to celebrate with a good single malt Scotch.