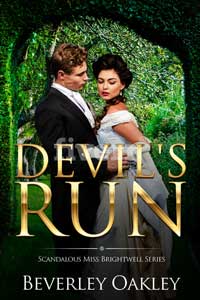 A rigged horserace and a marriage offer riding on the outcome. When Miss Eliza Montrose unexpectedly becomes legal owner of the horse tipped to win the East Anglia Cup, her future is finally in her hands – but at what cost?

George Bramley, nephew to the Earl of Quamby, will wager anything. Even his future bride.

Miss Eliza Montrose will accept any wager to be reunited with the child she was forced to relinquish after an indiscretion — even if it means marrying a man she does not love.

But with her heart suddenly engaged by handsome, charming Rufus Patmore who has just bought a horse from her betrothed George Bramley in whose household her son lives as a pauper child, the outcome of the wager is suddenly fraught with peril.

Beverley Oakley was seventeen when she bundled up her first her 500+ page romance and sent it to a publisher. Unfortunately drowning her heroine on the last page was apparently not in line with the expectations of romance readers so Beverley became a journalist.

Twenty-six years later Beverley was delighted to receive her first publishing contract from Robert Hale (UK) for a romance in which she ensured her heroine was saved from drowning in the icy North Sea.

Since 2009 Beverley has written more than thirteen historical romances, mostly set in England during the early nineteenth century. Mystery, intrigue and adventure spill from their pages and if she can pull off a thrilling race to save someone’s honour – or a worthy damsel from the noose – it’s time to celebrate with a good single malt Scotch.