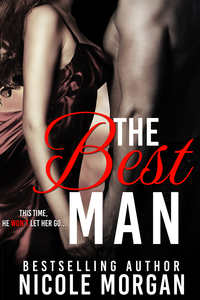 Today’s featured book is The Best Man, a novella within the
Wedding Dreams by Nicole Morgan and others.

Genre: Contemporary Romance
Author: Nicole Morgan, et. al
Book heat level (based on movie ratings): R
Avery Foster first met the
charming and irresistible Jackson Parks three years earlier at her best friend’s
wedding. After days of flirting with the sexy best man who made her pulse race
the two embarked on a passionate night unlike any she’d experienced before.
Truly believing that they shared a connection, Avery had been heartbroken when
she woke the next morning to find a note to learn that she had been nothing
more than a one night stand.
Now years later and on a much
needed vacation from her demanding job, Avery is looking forward to the quiet
days of solitude she is sure she’ll find in the mountains of Colorado. What she
doesn’t know is that her matchmaking friends have other plans in store for her.
They’ve arranged for Jackson to join her in hopes the two can rekindle their
romance that fizzled out far too soon.
Jackson always regretted the way
he had left things with Avery. Older, wiser and in a better place in his life
where he wants something more, Jackson is sure that Avery is what he’s been
looking for all along. He knows he burned a bridge the day he’d walked out on
her, but he refuses to let that be the reason he doesn’t at least try. He’d
been foolish enough to let her go once. He wasn’t about to make that same
mistake again.
And this time, he won’t let her
go…
Amazon: https://www.amazon.com/dp/B01NBVER4P

One thought on “The Best Man By @AuthorNicMorgan #99cents #RLFBlog”