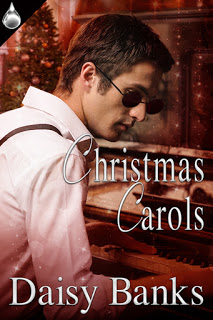 Daisy Banks shares details
about the creation of Stephen Grafton in the book Christmas
Carols.

Title Christmas Carols
Genre Historical Romance
Author Daisy Banks
Book heat level G, Sweet
Stephen Grafton, the blind organist
at Holy Trinity Church, is gaining a reputation for his fine playing and
compositions. Alice Broadbrace’s initial venture back into society after years
in deep mourning brings her to the notice of the talented organist, and he offers
her the opportunity to sing a solo carol to his accompaniment. His courage
convinces her to find her own, while her charm entices him into thoughts of
romance. A difficult walk in a snow storm is only the beginning of Stephen and
Alice’s journey to happiness. Enjoy this sweet Victorian tale of talent and
love blossoming.

Name: Stephen Grafton
Age: 29
Gender: Male
Birthplace: Birmingham, England.
Profession: Musician and composer, organist at Holy Trinity
Church.
Ethnicity:  English
Stephen is approximately 5’10 in height, quite tall for the
era he lives in. He is lean and slender with fair hair and expressive hands.
Stephen has been blind since birth and uses a dog to help him, he calls the dog
Blue.
Who is the
significant other in your character’s life?
Alice Broadbrace.
How does your hero
dress?
Stephen wears the fashions of his era, the early 1860’s. His
day to day wear is a suit with tail coat, trousers and waistcoat. For recital
performances he asks his valet to tie an elaborate bow tie for him. His dog,
Blue, also has a bow on his collar for recital evenings. As the story is set in
the winter Stephen wears a warm top coat and a hat. He does wear gloves as is
socially acceptable for the era but he dislikes them as they mean he loses
depth in his sense of touch.
If you could only
hear this character’s voice (but not see him) what characteristic would
identify him?
Self certainty and confidence radiate in Stephen’s voice. He
has passed through many trials to reach the position he is in and this means he
is definitely willing to voice his opinion with little fear.
How educated is this
character?
Stephen has a doctorate in music from Cambridge. He prefers
not to use the official title as he finds people make presumptions about him if
he does. He takes an interest in things cultural and issues of the day in his
local community.
Does he scrape by,
live comfortably, live extravagantly?
Stephen has his own home not too far from Holy Trinity
Church. A legacy from a relative assisted him to attend Cambridge and once he
qualified to purchase his home. He receives a salary from the church for his
playing and his recitals. He lives comfortably enough with his dog, has a
manservant to attend him and assist with the running of his house, and a maid
of all work who comes in to clean.
What is your
character’s viewpoint on wealth?
Wealth is a useful tool which enables Stephen to travel and
live his life in the way he wishes. He does not consider himself to be a
wealthy man in monetary terms he is far more concerned with his music.
Are any of his skills
a source of pride or embarrassment, and if so, which ones and why?
When Stephen was a very small boy a tutor recognized his
talent in music. He is a gifted musician and with coaching his skills improved
to the point he could attend university to study further. Stephen is aware of
his skills and is very demanding of himself in performance and composition. He
would say he is always learning.
What kinds of things
does your character always carry in his pockets?
Stephen usually carries a white linen handkerchief, keys to
his home and to his cash box in the house. He also makes sure he has his coin
holder and some dog biscuits as a treat for Blue.
Does this character
see morality as black-and-white, or with shades of gray?
This question would entertain Stephen as being blind he
doesn’t see the world through visuals but through touch, sound and smell.
Stephen has a strong sense of what he considers right and wrong, and finds some
social customs and expectations foolish especially those Alice believes might
lead to gossip. He would say, the gossips should go and find more useful
occupations.
Does your character
care about what others assume about him?
In short, no. Stephen is a self confident person and has a
vast amount of self belief. He takes care that his appearance and manners should
be acceptable and has attained a level of independence he enjoys. If people
assume he is weakened in any way by being blind he will do his best to show
them that is not so. He does recognize there are situations when he requires
some assistance and isn’t too proud to ask for it in unfamiliar places.

Why do you think your
writer chose to write about you?
Ms. Banks enjoys the unusual and I suspect she found me a
surprise and therefore wished to work with me. As the story continued I like to
think Ms. Banks grew rather fond of Alice and I. We are both glad she told the
story.
What do you wish your
writer had not told others about you?
Nothing. I am aware that there are times in the story when I
am forthright and frank but those qualities are part of my personality. I am
sure readers will understand my motives for some comments were genuine concerns.
I only wanted the best outcome possible.
What other character
from your book do you think your writer should write a book about, and why?
I think Ms. Banks should devote sometime to Elijah Whistler,
the owner of the Eagle Book Emporium. I would think there might be a natural
affinity between the two, with his interest in books and her work as an author.
If Ms. Banks spent some time working with him it might also soothe his
discomfort at the outcome of my story.
Why do you think your
writer loves to write?
Ms. Banks listens to music frequently but she is not
musical. I am afraid that is a flaw I am forced to comment on. Ms. Banks
neither plays nor sings and in my opinion she therefore devotes her energies to
writing. I do know she is quite driven at times when she writes. Having some
understanding of the creative process I recognize its grip on an individual.
However, I still think she would be improved by a more direct association with
music. When she began the tale I had hopes to influence her to at least take up
some choral activity but sadly I failed.
Is there anything
you’d like to say to your writer?
Ms. Banks, Alice and I thank you for putting our story into
words.

Publisher http://www.lsbooks.com/daisy-banks-c365.php
Amazon http://amazon.com/author/daisybanks
Barnes and Noble http://www.barnesandnoble.com/s/Daisy+Banks?fs=0&_requestid=43043
ARe https://www.allromanceebooks.com/storeSearch.html?sortBy=recentlyAdded&searchBy=author&qString=Daisy+Banks
Kobo ttps://store.kobobooks.com/search?Query=daisy+banks
Itunes https://itunes.apple.com/gb/artist/daisy-banks/id396430332?mt=11
Author Bio
Daisy Banks writes romance in the Historical, Paranormal and
Fantasy genres. Her focus is to offer the best tale she can to readers. Daisy
is married, with two grown up sons. Antiques and collecting entertain Daisy
when she isn’t writing. There are also some rare occasions she makes a meal
that doesn’t stick to the pan.