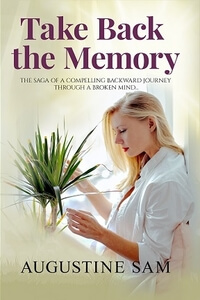 Augustine Sam, welcome to Romance Lives Forever. Let’s meet Paige Lyman from Take Back the Memory, a Contemporary Women’s Fiction. I’m Kayelle Allen, author and owner of this blog. Happy to have you here! Please tell us about your book.

Paige Lyman from Take Back the Memory

Character: Paige Lyman
Age: Over 50
Gender: Female
Birthplace: New York
Profession: Psychiatrist
Ethnicity: American
About the character:
Paige Lyman is a gorgeous redhead. She’s over fifty and now in semi-retirement, but is still an object of fascination to her daughter, Diane. She possesses the loveliest pair of legs on Riverside Drive, and when she wears skirts, which she does often, even young men from nearby Columbia University turn to stare. It amazes Diane that her mother’s stunning head of hair still causes whispers in elevators. What she doesn’t know is that Paige had an unusual childhood, and it is about to catch up with her…
Who is the significant other in your character’s life?
Stern W. (the man she thought she married)
How does your hero dress?
She is trendy, and always makes the effort to look beautiful and elegant
How educated is this character? Is she book smart, self-taught, widely-experienced?
She holds a PhD in psychiatry and is widely-experienced
What is your character’s family like?
It’s a close-knit family – an expatriate father and a devoted mom. She is an only child.
Is she close to family?
She remained close to her parents as long as they lived
Does she have children?
She has a daughter, Diane
Does this character see morality as black-and-white, or with shades of gray?
She does not see morality as black-and-white; she, in fact, comes across as someone with questionable morality
If someone from your character’s past showed up, who would she most want it to be, and why? OR who would she most NOT want it to be, and why?
If someone from her past showed up, she would most definitely want it to be her childhood crush, Bill, because she’d never recovered from his abandonment

Why do you think your writer chose to write about you?
I think he found my life story compelling
What do you wish your writer had not told others about you?
I wish he didn’t dwell so much on the naughty things I did for vengeance
Was there anything your writer discovered about you that was a surprise to one or both of you?
He was surprised that I could not fall out of love with Bill when he abandoned me for priesthood, seeing as we were just kids when it happened. To be honest, it surprised me too, but then, love is a mystery, an indecipherable mystery
Is there anything you’d like to say to your writer?
Well, thank you for giving your readers a portrait of my life, warts and all.

Tell us about Take Back the Memory

The saga of a compelling backward journey through a broken mind…
Paige Lyman, an accomplished psychiatrist, is on the verge of madness but she doesn’t know it yet. The madness begins when she gets it into her head to write her memoirs. As her brilliant mind assembles bits and pieces of her life for the book, ugly skeletons, long forgotten in the closet, rear their heads.
It all begins with a simple act of love. And love, for her is a blond-haired Irish boy named Bill, so when Bill abandons her for priesthood, the world around her collapses. Seized by a different passion—vengeance—she seeks her proverbial pound of flesh in the beds of various priests.
But that’s before she meets Stern W, a medical researcher, who sweeps into her life like a hurricane and marries her. And they live happily after until he dies in a helicopter crash and she discovers the startling truth about who he really was. Now, Paige, transformed from psychiatrist to patient, is saddled with a damning memory she must decipher to be free.
Take Back the Memory is the saga of her compelling backward journey through her own life on a psychotherapist’s couch.

Where to Buy Take Back the Memory

Augustine Sam is a journalist by profession, a novelist by choice, and a poet by chance. A member of the U.K. Chartered Institute of Journalists, he is a bilingual writer and formerly Special Desk editor at THISDAY newspapers, an authoritative Third World daily first published with the Financial Times of London. He later became a correspondent for central Europe, and afterward, fell in love with poetry the way you fall asleep: slowly, and then all at once.
He was the winner of the Editors’ Choice Award in the North America Open Poetry Contest and a Finalist in the International Book Award Gala. His poems have been published in international anthologies, including “Measures of the Heart” and “Sounds of Silence.”
Website https://www.augustinesam.com/
Blog https://authorsuite.blogspot.com/
Twitter https://twitter.com/austin_sam001
Facebook https://www.facebook.com/austin.sam001/
Pinterest https://www.pinterest.com/austinsam001/
Goodreads https://www.goodreads.com/author/show/1831067.Augustine_Sam
Amazon Author Page https://www.amazon.com/-/e/B00QOREIB0