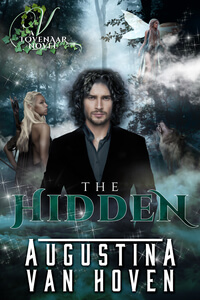 Augustina Van Hoven, welcome to Romance Lives Forever. I’m Kayelle Allen, author and owner of this blog. Happy to have you here! We’re excited to find out more about your hero, but first, tell us about The Hidden.

The Hidden by Augustina Van Hoven

The monsters are real…

For most of her life, Lily Montgomery had thought the creatures that inhabited her dreams lived on only in the pages of the horror novels she wrote. Until she was kidnapped by a vampire and forced to go on the run from werewolves and other shapeshifters. And from her emotions. For, against all reason, her heart was also at risk of being captured by the vampire.

Valerian DuCharme had been turned into a vampire against his will. But in the turning, he did not lose his charisma or his caring. Now the enforcer for one of the princely houses of the Community, he tried to ensure the safety of anyone who came within range. And of many who didn’t. But it was all reflex, until he met Lily. And emotions he hadn’t felt for hundreds of years surfaced.

Know the Hero from The Hidden

He’d go for a run under the stars, preferable along a nice lake or river.

He loves breakfast food with eggs and bacon so he’d pick up a bacon, egg & cheese biscuit.

He loves boots, jeans, a tee shirt and his leather jacket.

If it is something created before electricity, he can fix but modern things, not so much.

His current mission is to find out who is leaking information about the hidden community to the humans. He needs to question a woman about it but soon discovers there are others after her. He kidnapped her to keep her safe and now must protector her from shifters and others who want to kill both of them.

Since he was turned into a vampire, he lost the ability to have his own, so he is very kind and gentle with children.

Since being in any kind of sunlight turns him into a briquette, he is in his case before sunrise.

That depends on his mission. He can be very charming and diplomatic when he needs their trust or he can scare the crap out of them if they are in his way.

He has a trusted human assistant named Karl. Karl also acts as his daylight ambassador.

Personal vehicle always. He is either in his van if he is on a mission or his Ducati Diavel motorcycle.

Where to buy The Hidden

Augustina Van Hoven was born in The Netherlands and currently resides in the Pacific Northwest with her husband, dog and two cats. She is an avid reader of romance, science fiction and fantasy. When she’s not writing she likes to work in her garden or in the winter months crochet and knit on her knitting machines.
Website https://augustinavanhoven.com/
Twitter https://twitter.com/augustinavhoven
Facebook https://www.facebook.com/Augustina-Van-Hoven/
Pinterest https://www.pinterest.co.uk/augustinavhoven/
BookBub https://www.bookbub.com/authors/augustina-van-hoven
Amazon Author Pagehttps://www.amazon.com/Augustina-Van-Hoven/e/B06Y3JKV7T/
Get to know Augustina Van Hoven better by signing up for an email newsletter https://augustinavanhoven.com/contest/