Is It True: King Of Swords By Anna Durbin @TheAnnaDurbin #RLFblog #Regency #Romance 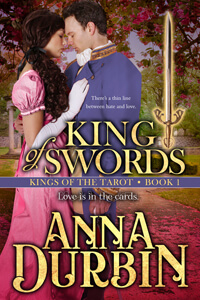 Welcome to Romance Lives Forever. I’m Kayelle Allen, author and owner of this blog. Let’s play Is It True with today’s guest, Anna Durbin, author of King of Swords, a Regency romance. This is a game with yes and no questions. Writers can elaborate on answers as much as they choose.

King of Swords by Anna Durbin

Genre Regency romance
Book heat level (based on movie ratings): R
A fiercely independent spinster who desperately needs assistance . . .
Lady Cassandra Gardner will inherit fifty thousand pounds when she turns thirty—and just in time. She has a special purpose for her money, one no man could understand. But when her brother the duke tries to cheat her out of her fortune, she has no choice but to accept the help of the man who shattered her heart years ago.
A gallant nobleman who can’t resist rescuing a damsel in distress . . .
Lord William Poniard is looking for a wife, but the last woman he should consider marrying is his archenemy’s sister, the woman who hates him with a vengeance. Yet, when she is compromised by her brother’s nefarious scheme, he sees an opportunity not only to rescue the lady by marrying her but also to exact revenge on the duke for his past betrayal.
Will she accept his offer of help and at what cost?
Despite the long-standing animosity between Cassandra and William, sparks fly when their attraction to one another ignites into a passion neither saw coming. Will one night of rapture unite them or drive them apart? Can she forget past wounds and let him back into her heart? And can he convince her that she is the only woman he wants?

this is your first book?
Yes. It’s my first published book at any rate. I wrote my first true “book” when I was in grade school and have been thinking up stories ever since.
this book is part of a series?
Yes. King of Swords is part of the Kings of the Tarot series. Each hero in the series is based on one of the kings in the tarot card deck, and I use the symbolism of the tarot cards throughout the story.
you lost sleep while writing this book?
Yes. I frequently think about plot points while trying to fall asleep, and it can keep me wide awake while I go through scenarios in my head. Sometimes, I give up on trying to sleep and just get up and go to my computer room and write.
you did research for this book?
Yes. Tons of research. The book takes place in Regency England, so I had to do extensive research on the period. Specifically, I delved into marriage laws of the era, Gretna Green elopements, and other topics.
some characters in this book are not human? (pets for example)
No. There are no non-human characters in this book.
this book has more than one genre?
No. The book is simply a Regency romance.
you speak more than one language?
No. I did take French in junior high and high school but never mastered the language.
you grew up where you live now?
No. I grew up in Council Bluffs, Iowa, but now live in Madison, Wisconsin.
you love to read?
Yes. I love to read all sorts of books ranging from romance to non-fiction.
you are never late?
No. I always aim to be on time, but sometimes I miss the mark.
you love pizza?
No. I’ll eat pizza, but I do not love it whatsoever.
you love sushi?
No. Absolutely NOT.
you have a pet?
Yes. We have a calico cat named Maizy. She will be one year old in March, and we call her Crazy Maizy because she leaps through the air and flies around the house like a crazy woman. Although it’s fun to see her burn off that kitten energy, we’re hoping she calms down when she’s a little older.

Where to buy King of Swords

Anna Durbin is the author of charming tales of the Beau Monde. Having grown up reading sagas of chivalry and romance, she began crafting her own elaborate stories in her imagination at a young age. It was only natural that she would one day write them down. Her first novel, King of Swords, was a 2012 Golden Heart® finalist.
Despite years of study in the biological and physical sciences, her true love has always been the literary arts. Inspired by her favorite author, Jane Austen, Anna adores the Regency Era and writes period pieces set during that time that show love conquering adversity. Oddly, for all her love of science and history, she is a faithful devotee of the New Age. She discovered tarot cards in a New Age shop in Minneapolis during a high school class trip one year and has been enchanted with them ever since. She enjoys weaving the symbolism of the tarot deck into her storylines.
Anna has lived in ten different states throughout her lifetime, from California to New Jersey. A Midwesterner at heart, she was born in Kansas and raised in Iowa. Currently, she lives in Wisconsin with her husband and works as a technician for local government.
Website https://annadurbinauthor.com/
Twitter https://twitter.com/TheAnnaDurbin
Facebook https://www.facebook.com/AnnaDurbinAuthor/
Goodreads https://www.goodreads.com/book/show/35424999-king-of-swords
Amazon Author Page https://www.amazon.com/Anna-Durbin/e/B072N25NR4/

Posted in Is It True, Regency| Tagged Anna Durbin, Is It True, King of Swords, Regency Romance|

One thought on “Is It True: King Of Swords By Anna Durbin @TheAnnaDurbin #RLFblog #Regency #Romance”