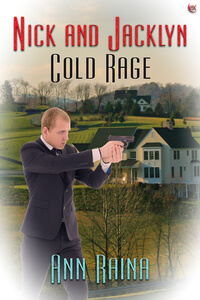 In Ann Raina’s latest book in the series with Nick and Jacklyn, Richmond’s Deputy Mayor Dobson is brutally murdered. The FBI investigation reveals that this case isn’t the only one in which an abusive husband died of unnatural causes, but will the agents be clever enough to uncover the truth before the next murder happens?

Ann, welcome to Romance Lives Forever. I’m Kayelle Allen, author and owner of this blog. Happy to have you here! Please tell us about your series.

Cold Rage in the Nick and Jacklyn series

Even the best intentions have a blind side.

In Richmond, Virginia, Deputy Mayor Dobson is brutally murdered. The FBI investigation reveals that this case isn’t the only one in which an abusive husband died of unnatural causes. Special Agent Nicolas Hayes and his team begin the investigation but soon reach a dead end. There is no evidence and no suspect. When an old enemy appears on the scene, the investigation comes to a standstill, and Nicolas finds himself in mortal danger.

This is the fifth book in the series.

As long as the ideas keep coming, I would like to continue writing because I’ve come to love the main characters. Book six – Barred Doors – will be published this spring, and I’m currently working on number nine.

Nicolas Hayes is the FBI agent in charge of the investigations, a man true to his words, strong and resilient in his job. He loves his girlfriend, Jacklyn, dearly. And while he’s an independent character on the job, he’s her submissive in the bedroom. As you can imagine, Jacklyn’s a strong woman who knows what she wants.

Nicolas and his partner, Jason Beckham, are working at the FBI, investigating major crimes, such as serial killers and bank robbers. The side stories deal with the private lives of both agents.

The books build on each other though every novel can be read as a stand-alone.
Twisted Mind
Famous Murders
Blind Trust
Chosen Brothers
Cold Rage

When you plan to write more than one novel with the same main characters, you have time and space to develop the characters. You have time to let them grow and change. For example, in the first book, Nicolas comes to know Jacklyn and doesn’t know that she’s a mistress. He doesn’t know anything about bondage games. He’s hesitant at first, but she convinces him slowly and with his consent, that this kind of love making can be truly fulfilling. In the second book, they spent a lovely weekend together, and she introduces him to a range of bondage games that leave him breathless in every kind of the meaning.

I wrote another series years ago dealing with a bodyguard of the Secret Service, Ethan Mahoney, and his wife, Jazmin. I also wrote several Science Fiction books, for example a trilogy named Living for the Act, in which women have taken over the government on a planet and try to reconstruct a society that is torn by war and the loss of fertile men.

Where to buy Cold Rage

Ann Raina lives and works in Germany with cats and a horse (which has its own home). Riding and writing are her favorite hobbies without putting one above the other. Her latest series, starting with Twisted Mind, deals with FBI Agent Nicolas Hayes, his cases of capital crimes, and his demanding and commanding lover, Jacklyn Hollander. In all her books she combines romance, suspense, and humorous elements, for no thrilling story can stand without a comic relief.
Facebook https://www.facebook.com/ann.raina.7
Amazon Author Page https://www.amazon.com/Ann-Raina/e/B004ZFFNAS