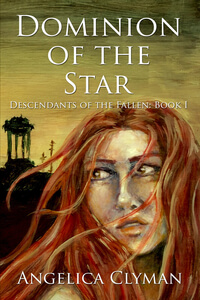 Angelica Clyman, welcome to Romance Lives Forever. I’m Kayelle Allen, author and owner of this blog. Happy to have you here! We’re excited to find out more about your hero, but first, tell us about the book.

Dominion of the Star by Angelica Clyman

The totality of a solar eclipse lasts only a few short minutes. That’s more than enough time for an apocalypse to erupt.
Almost eighteen years have passed since the Eclipse changed the Earth forever, and Sebastian Za’in rose from the chaos and seized control, imposing his order on the broken planet. In a world ruled by fear and superstition, where all gods have perished, there is no one who can stand up to Za’in, the man rumored to be one of the Nephilim—hybrid offspring of Angel and Man. In a few short months, another Eclipse will occur, and while there are those who expect a new natural disaster, Za’in has plans of his own.

Completely unaware of this global turmoil, Kayla Steelryn has spent most of her life in a quiet village, longing to uncover her hidden past. When she leaves her home in search of answers, she finds herself faced with the truth about her identity, forced to choose between the two men she loves, and thrust into a conflict where she alone has the power to stop an event more disastrous than the end of the world.

Know the Hero from Dominion of the Star

Jeremy is usually found brooding somewhere beneath the stars, whether it’s up on a water tower or down in the wastelands, he usually has something heavy on his mind.

He can’t afford to be picky in a world ravaged by disaster, but he hates slimy things in jars.

The darker the better, but after the Ruiners become clamped to his arms, shirts are no longer an option!

Jeremy is better at breaking things, but he can get by with very little.

What HASN’T gone badly? He was born under a bad sign and things have gone down from there, but he still can’t deny some of his problems are his own fault.

Jeremy doesn’t really have experience with any kids other than Kit, and she is no ordinary little girl…

He’s used to getting up early, so he’s not any more irritable than usual (thankfully)!

He prefers that people don’t know the truth about him, but it’s been hard to escape. When he first met Kayla, she was blissfully unaware of his darkness and that drew him to her.

Jeremy’s not afraid to get his hands dirty!

The cross tattoo across his chest wasn’t his idea and he’d get rid of it if he could – but it was part of the deal if he wanted to become an Arch.

He prefers to rely on himself, so things were better when he had his motorcycle. Sharing that truck with the pirates was definitely a low point…

Toss – his world’s so messed up already, he doesn’t think such a small gesture would make a difference.

Where to buy Dominion of the Star

Angelica Clyman was raised on Catholicism and urban legends, fairy tales and 80s movies. Her love for fantasy books and poetry was put on hold while she pursued other passions, but she found her way back to words and stories after following the seemingly disparate paths of the visual arts, academia, yoga, martial arts, business, dance and magick. Angelica is an artist, educator, wife, and mother. “Dominion of the Star” is her first novel.
Website http://www.angelicaclyman.com/writing/
Facebook http://www.facebook.com/DominionoftheStar/
Pinterest https://www.pinterest.com/angelclyman/
Goodreads https://www.goodreads.com/book/show/28700275-dominion-of-the-star
Amazon Author Page https://www.amazon.com/Angelica-Clyman/e/B012HD6CAE