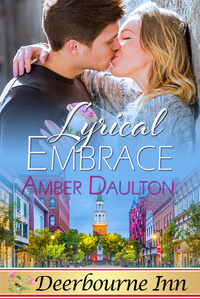 Amber Daulton, welcome to Romance Lives Forever. I’m Kayelle Allen, author and owner of this blog. Happy to have you here! We’re excited to find out more about your hero, but first, tell us about the book.

Genre Romantic Suspense
Book heat level (based on movie ratings): PG-13
Out-of-work violinist Erica Timberly decides enough is enough. She leaves her abusive boyfriend and flees the big city, but then her car breaks down in the middle of the night. Though wary of men, she accepts help from Dylan Haynes, a stranger driving by on the road, and soon recognizes him as the sexy former drummer of her favorite indie rock band. Maybe, just maybe, her run of bad luck is finally turning around.
Music teacher Dylan Haynes knows Erica is in trouble, and her black eye is only the first clue. The stubborn yet vulnerable woman needs a friend, but he’s determined to give her everything she deserves.
Will Erica listen to the music in her heart and trust Dylan, or will her past always threaten her future?

Know the Hero from Lyrical Embrace

Here are some fun questions to help us know your hero.
It’s late, he’s bored. What does he do?
Dylan is a professional drummer and finds playing instruments relaxing. He would rock out on his drum set or play some music at a deafening level.
What kind of food would he impulse buy if hungry?
Tortilla chips. Something salty and crunchy.
Describe the kind of clothes he prefers to wear.
His closet and dresser are full of T-shirts and jeans. He likes the simple things.
Does he know how to fix things?
That depends on what’s broken. If an instrument needs work, he could tune that right up. He’s a volunteer fireman and a certified EMT, so he’s knows first aid and is used to responding to emergences and helping people. He’s no good with cars, though. When Erica’s car clunked out and died on the road, he couldn’t do anything about it. Instead, he served as an excellent chauffeur.
He tried to do something and it went badly. Tell us about it.
Dylan tries to do his best at everything, so if something goes wrong, he’ll try his damnedest to take care of the problem. He’s a pretty laidback kind of guy, however, so he won’t freak out over the problem.
How does he act around children he doesn’t know?
Even though Dylan has a rock star past, he’s now a respectable teacher. A music teacher, that is! He’s around kids all the time, sharing his love of music. His students range from ages eight and up, and he’s comfortable around them from the get-go.
What is he like first thing in the morning?
Too chipper. He’s one of those dreaded morning people.
Can he use chopsticks?
He’s patient, but not patient enough to learn how to use those.
Does he drink coffee? If so, how does he take it? If not, what does he drink instead?
Coffee, black.
What apps would he have on his phone?
The weather app, definitely.
Android or iPhone?
Smartphone
Beard or clean-shaven?
Clean-shaven mostly, but sometimes a little scruffy.
Earrings/piercings/tattoos or unadorned skin?
He has a red dragon tattoo on his arm. It wraps around his biceps, and Erica loves kissing and licking it.
Personal vehicle or public transport?
He has a silver sedan, which he makes payments on.
Recycle or toss?
Recycle. His family is big on taking care of the environment, so he always separates his trash.
Thanks for helping us get to know your hero!

Where to buy Lyrical Embrace